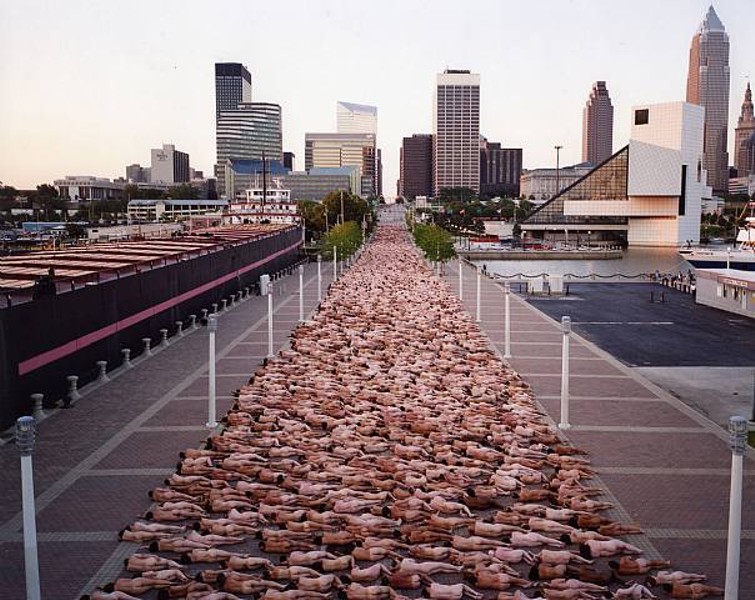 Photographer Spencer Tunick specializes in large-scale nude shots, a kind of temporary installation that includes anywhere from a few hundred to a few thousand naked souls in a variety of settings. The 49-year-old artist, who now lives in upstate New York with his wife and daughters, has produced more than 75 of these shots. One of those, you'll remember, was in Cleveland back in 2004. Tunick, with the help of MOCA Cleveland, gathered 2,500 men and women on the East Ninth Street pier.

Twelve years later, we caught up with Tunick as he announces his plans to return to Cleveland for another mass nude installation. Far smaller in scope this time — 100 women — and on private property, the shoot is set for sunrise on Sunday morning, July 17, the week of the Republican National Convention. We talked to him about why the location and the shot are so important to him.

Scene: We're still a ways out from the RNC, and you're obviously working on that shot, but what else are you working on right now?

Spencer Tunick: I'm trying to organize about 6,000 people to pose in Bogota, Colombia, for a shot. We have around 12,000 people already signed up. That generally means about half of them will show up. We're trying to orchestrate that with the Museum of Modern Art Bogota. That's going to happen the first week of June. The location for the installation will be announced about a week beforehand.

And about a month later you'll return to Cleveland. What was the genesis of the idea to do a shot the week of the Republican National Convention and how long has this been in the works?

I've always wanted to do large installation works. It's not necessarily a title I gave to the work, because it's really a cross between photography and an installation and a performance. It's easier to qualify them as installations, albeit temporary.

I was thinking about doing some work in D.C. I wanted to document the works in a film version, not so much a documentary, but a film that would have a combination of documentary and animation. Sort of fantasy scenes. Not sci-fi per se, but dreamlike in scenes that don't really exist. I wanted to have John Quincy Adams walking from the White House and jumping in the Potomac River naked and skinny-dipping, for example. I had this idea to have conceptually and physically impossible works with the body in a fantasy scene, a mosaic art film that would document the installation.

And then I saw a wonderful film called Chicago 10, directed by Brett Morgen. [Ed. note: The 2007 film combines archived materials and current commentary to explore the demonstrations of the infamous 1968 Democratic Convention in Chicago.] I had asked him about his film and if he'd be interested, and he was busy but referred me to others, and I sort of let the project go for the time being.

What brought the idea back?

In 2013, I was at Burning Man and a friend had a mirror that was about 10-inches wide and was posing for me in the desert. She was reflecting her face in the mirror and I was doing a nude and I started thinking if I came back to the desert with 300 or 400 women holding spheres, I could make a really powerful work when the sun rises. So I applied for a grant from Burning Man, the idea being using the grant money to purchase the spheres, and I got turned down. But the idea was to get these spheres for an eventual installation at the RNC. In a way, I was going to do the desert work to fund the RNC work. I couldn't believe I got turned down: I thought Burning Man would want to push the boundaries of their enclosed area in Nevada, and I thought it was a reasonable way to help an artist out. So I sucked it up and decided to do it on my own, basically.

It was Chicago 10 and the history of protest and art in action, at conventions, that I loved.

When I was arrested in New York for my works — illegally I should add; it's legal to work with the naked body on New York streets; Guilliani had instructed the police commission to instruct the police to arrest me and the participants even though it was legal — I had met William Kuntsler, who was portrayed in the film and represented activists. Ron Kuby was his law partner and Ron became my lawyer for five incidents I had with the police.

The deplorable rhetoric from Trump and others against women during the campaign had to play a part.

I spent a lot of time with my wife working on the language for the website [spencertunickcleveland.com]. I wrote it with her and the work is for my daughters, for their future, for them not to grow up in a society with hate, for them to grow up in a world with less violence toward women and more opportunities for them. And there are other subject matters, concerning the environment for instance, and I think people can read into the final photograph and get their own message out of the work and the idea of this ray of light extending over the city. It's sort of to energize the city, to heat it up, and this ray of light bringing knowledge and helping maybe to tone down the rhetoric of hate and prejudice against women preceding the convention.

[The language from the website includes the following: "The photograph will involve 100 nude women holding large mirror discs, reflecting the knowledge and wisdom of progressive women and the concept of "Mother Nature" into and onto the convention center, cityscape and horizon of Cleveland. The philosophy of the artwork relates to the idea of the sacred feminine. By holding mirrors, we hope to suggest that women are a reflection and embodiment of nature, the sun, the sky and the land. We want to express the belief that we will rely upon the strength, intuition and wisdom of progressive and enlightened women to find our place in nature and to regain the balance within it. The mirrors communicate that we are a reflection of ourselves, each other, and of the world that surrounds us. The woman becomes the future and the future becomes the woman.