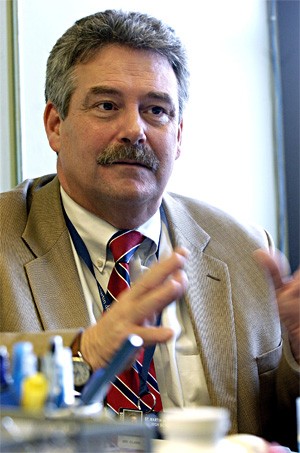 On a freezing February morning, Richard Clark, president of St. Martin de Porres High School, hustles toward the brick building at East 61st and Lausche. A woman standing at a bus stop pulls him aside. She lives nearby and has heard from the older kids that all St. Martin students are college-bound — a rare thing in this impoverished section of St. Clair-Superior.

Her son is only 12, but she's looking at his future, hoping it won't include the bludgeon that is the Cleveland public schools. "How much does it cost to send your kid there?" she asks.

Clark hedges. "Well, it's kind of what you can afford," he says, then asks if she'd like to schedule time to talk.

But Mom knows better than to make an appointment, to get her hopes up about a Catholic education that's surely beyond her purse. So she leans into Clark's ear and whispers an offer. "What about $1,000 a year?"

"I told her we can work this out," Clark recalls later from his cluttered office.

The woman soon arrived and laid out her meager finances. To Clark, it was clear that even $1,000 was more than she should spare: "I told her, 'We're not going to do that to you.'" He would find a way to make a better deal.

Even to Clark, the tale is astounding. Where else, he asks, can a mother name her own price and be accommodated by a private school? But this is the miracle of St. Martin, a school like no other in Cleveland.

Statistically speaking, it should be failing, like the rest of the inner-city schools. Its student body — all low-income, mostly black — has proved the hardest to teach. But by re-engineering education from top to bottom, St. Martin has managed to produce an almost 100 percent success rate.

The four-year-old school will graduate its first class in June. So far, 44 of the 50 seniors have been admitted to college. Clark anticipates that by the end of the year, all will be.

The key is its economic model. Students are placed in outside jobs at companies like the Cleveland Clinic and PricewaterhouseCoopers, where they work off the bulk of their tuition. The rest is covered by grants, donations, and whatever parents can pay. And teachers are paid based on the performance of their students.

The end result is a full-fledged Jesuit education, from a school that seems to be working in ways so many others haven't.

St. Martin is one of 17 Cristo Rey Network schools, which are modeled after a high school launched in 1996 in Pilsen, a Mexican neighborhood in Chicago.

At the time, Father John Foley, freshly returned from a 30-year career as a Jesuit school administrator in Peru, was determined to build a private school for poor Mexican kids. From the beginning, his approach was stubbornly counterintuitive.

Instead of opening where the money was, Foley targeted the area with the greatest need for quality schooling and vowed to deal with tuition as an afterthought. "It was kind of countercultural right from the start," he says.

A consultant came up with the idea that the school act as a temp agency. Four students were rented out to compose one worker, in exchange for $25,000 a year.

While more than a few rejected the proposition, enough agreed to make it possible. The office work nets $6,250 per student. Combined with grants and donations, Foley found it was enough to never turn away kids based on what their parents could pay.

As he shuttled the first Cristo Rey class to downtown offices, Foley soon found that this workday — conceived as simply a means to an end — was the students' favorite part of the week. "It turned out to be so much more than just a way to bring money into the school," he says. "It's a tremendous human experience for the kids — they get excited about life."

So Clark, formerly a principal at St. Ignatius, opened St. Martin four years ago. Like all Cristo Rey schools, the corporate work program was the crux of the school's feasibility. He's been amazed to see kids energized by tasks — like filing, mailing, data entry — that drum the average cubicle-dweller to despair.

"We often think of a job as a kind of prison," says Clark. "They think, 'This is great!' For a fourteen-year-old kid to get a lunch hour, a fifteen-minute break, get to make a phone call, is amazing."

"Ask anybody in this school," adds senior Richie Capeles, who works at Fidelity Insurance. "Their favorite part is working. It's the responsibility. It's like, 'I feel important.'"

To the students, who come from beaten neighborhoods like Collinwood, Slavic Village, and Hough, reporting to an office downtown is more than a thrill: It's their first glimpse of a transcendent future.

"A lot of the kids are going to be the first generation to get a college education in their family," says Shameka Jones, chief financial officer of the Cleveland City Council, where four St. Martin students work. "They're far from that silver spoon. All of them have such a grateful attitude to be here, and they're putting together a plan for their life."

Several kids transport patients at the Cleveland Clinic, and though they can change clothes at the hospital, they usually return to school wearing their scrubs. "It's a point of pride," says Clark. "It's like, 'I'm a doctor!'"

While St. Martin manipulates conventional economics to pay the bills, it doesn't cut corners in the classroom. Each is outfitted with a computerized whiteboard, and laptops are carted into class. This year's seniors were recently given PalmPilots to keep. Even the classic chair-desk combo has been ergonomically redesigned.

But the most avant-garde aspect of the school is its curriculum. Clark and company have erased and redrawn every age-old convention that goes unquestioned in most schools. Classes are based on "backwards design," where teachers are taught to structure curriculum not from the beginning of a semester, but from the targeted end — to ensure that students are ready by the end of the year.

The curriculum also varies for each student. Though some kids enroll at St. Martin as many as four grades behind, custom teaching helps them get caught up by the end of four years.

Even homework, forever considered the staple of a serious education, is diminished. "We want to respect the students and that some of them have to work a second job to put a family's food on the table," says biology teacher Marty Coggin. "And in general, there are a lot of studies that are questioning the validity of homework at all."

If there is one unquestioned principle, it's that everything they do must be research-supported. "That's something I hear all the time," says English teacher Faith Hurley. "If I want to do something different, they say, 'Look it up; find me some kind of research.'"

The intensive instruction naturally takes time. Coggin estimates that teachers work 50-70 hours a week. To ensure they stay motivated, Clark based pay — ranging from $35,000 to $60,000 — on student performance.

He understands the pitfalls of compensating them like car salesmen. When he worked at Illinois' Loyola Academy, the school experimented with merit pay. Teachers naturally did their best to appear committed. "It was a disaster," he says. "A teacher would go to a game and tap an administrator on the shoulder to say, 'I'm at the game.'"

But St. Martin teachers are handpicked for their ambition — which is only reinforced by the performance-based pay. "It has no effect on teaching," says Coggin. "Because of the hiring process, every teacher in this school is essentially a perfectionist. If they're not, then they quickly figure out that they don't want to be here."

Students, however, see more of an upside. "Sometimes I see them put a little extra into their classes," says Capeles. "It's like, 'We really need this money.'"

But the school is forced to accept the status quo in one aspect: standardized testing. It's the bane of teachers everywhere, but it plays a major role in how St. Martin teachers are paid.

"As faulty as it is," says Foley, "standardized testing is the one thing that we can consistently assess our students with and use to compare our schools."

For his part, Clark believes standardized testing is overly villainized. "The typical argument is that you're teaching the test, not the student," he says. "But the test is based on what you need to know to succeed in that field."

Either way, it's hard to argue against the Cristo Rey Network's success. According to Foley, 99 percent of its seniors have gone on to college.

Hurley has the task of teaching a sophomore English class after the 22-minute lunch break, and the students seem groggy, unenthused.

But the difference between this class and what you might find in the Cleveland schools is that none of these kids withdraw or give up. They don't act out, and they fall silent when it's time to dig into a worksheet. The assignment is designed by Hurley to engage them, combining drawing, writing, public speaking, and old-fashioned multiple-choice. This is the unglamorous grind that makes St. Martin work.

But to Clark, the ultimate test will come when these students age, and their children never come through St. Martin's doors because they don't meet the low-income requirement.