Har Mar Superstar insists his ribald R&B is no joke. It just sounds like one. 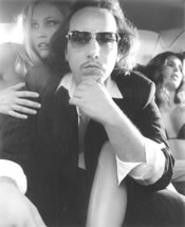 In the opening cut to Kill the Moonlight, the latest celebrated release by the bracing minimalist rock group Spoon, singer Britt Daniel unreels the album's central theme by describing a life lived for "Small Stakes." It could be about any wage slave who "feels all right from Friday night to Sunday" while trying to avoid getting "taken and used." But in the middle of the song, Daniels yanks the line to hook one particular species of small fry: "Small-time danger in your midsize car," he sings, "I don't dig the Stripes, but I'll go for Har Mar."

To knowing rock critics, the couplet seems to make perfect sense. "The Stripes" are the White Stripes, another bracing minimalist rock act -- one whose image and lyrics hint at a buried musical and sexual history far too complex for anyone committed to Daniel's small stakes to mess with. "Har Mar," on the other hand, is Har Mar Superstar, a one-man band out of St. Paul, Minnesota, that plays more than just R&B. The car's driver chooses the latter, it seems, because Har Mar readily provides the kind of simple smirk that helps indie-rock kids settle for less.

"I don't know why they wrote any song," Har Mar says with a pout from a tour stop in Detroit. "I don't care. There's not really much that you could ask me that I wouldn't say, 'I don't care' to, because I really don't give a fuck. I'm just having a good time. That's pretty much the whole gist of it."

Of course, not giving a fuck has been the gist of much great rock and roll. But unlike punk rockers and new wavers gone by, Har Mar doesn't belie his anomie with burning rage or freeze-dry it into an android stance. Instead, to quote "No Chorus," from his latest, You Can Feel Me, he "taps that healthy round ass," smugly playing a "playa" who's befuddled by the difference between sexy and sexist (just like Spinal Tap!). On the phone, Har Mar bristles at the suggestion that his act might be a joke: "I don't know where having a good time has to be a parody. Is that what you're getting at?"

For the most part, that seems to be what Har Mar himself is getting at. Built around squiggly electro-beats that lie halfway between the hard new wave thump of Miss Kitten and Co. and the jittery futuristic funk of the Neptunes, Har Mar's two albums seem primed to exploit a dance revival that connects everyone from underground club hoppers to TRL viewers. Yet the R&B lingo ("Sexy lady, dis the haters/Cuz they ain't no players"), the ribald sex jokes ("Deeper, deeper/I can feel your beeper"), and fake African American delivery are so blatantly overdone that they come off like the latest product of alt-rock's perpetual irony machine. Mystikal or R. Kelly might be equally lascivious -- or for that matter, equally absurd -- but their outrageousness works on a whole different level.

"Is that because they're black?" protests Har Mar. "I don't know why everyone thinks I'm making fun of something that I can do better than they can. Whatever. I listen to more R&B than anybody you know. And that's what I make. I make that music because I like to. And I don't understand why people automatically think that I must be kidding."

In the end, like so many indie ironists, Har Mar's shtick suggests that both he and his critics are right -- he does and doesn't "mean it." Even so, there are moments when the stance seems powered by far-uglier forces than the spinning magnets of homage and parody. That's especially true on Har Mar's eponymous 2000 debut for Kill Rock Stars, where one lyric disses a girl's Tommy gear and another lets a (brown-skinned?) lover know "Girl, You're Stupid." Two years later, however, Har Mar has toned down the ugliness for You Can Feel Me.

"I don't know [if it's] tamer, but I think it's more of a pop record. I made [it] before I was on any major label. I guess I do want to reach a larger audience. There are about 200 indie kids that are dying off in every major city, and I don't want to depend on them to pay my rent."

Actually, it's not even clear whose name would be on Har Mar's lease. According to his press bio, Har Mar is actually Harold Martin Tillman. In the past, Harold has claimed to be the younger brother of Sean Tillman, the leader of Sean Na Na, a group that trips through a library of hip rock styles in catchy songs with beguilingly nasty lyrics, often directed against women. It has since been revealed, though, that the two Tillmans are actually one and the same person, and Har Mar has stopped talking about his relation to Sean. Coincidentally (or not), Sean Na Na and Har Mar Superstar neatly complement each other's contempt -- the latter, more popular group being especially suitable as an outlet for misogynist fantasies, which, after all, are prevalent enough in hip-hop and R&B.

It also provides Tillman a way to tap into the indie audience without offering any commitment of his own in return -- wham, bam, thank you fans. Of course, a quickie can sometimes be fun for everyone involved, and You Can Feel Me has its moments. Beth Ditto of the Gossip grounds the album by lending her Southern soul to two cuts, and Har Mar's undeniable craft at imitation comes alive on the last three tracks, one of which actually admits to more than just a passing interest in a female love object. It's a reminder that, at his best, Har Mar tills the outer reaches of a field first hoed by Beck and self-conscious white-boy goofs like MC Paul Barman. (When Barman's name comes up, though, Har Mar declines comment. "If you can't say something good about somebody, don't say anything at all.")

In an e-mail exchange, Spoon's Britt Daniel steps to Har Mar's defense. "I chose Har Mar [for 'Small Stakes'] because I had just met [Harold] and I really liked him, both personally and as a performer. And I needed something to rhyme with 'car.' We played in Milwaukee on Thanksgiving Day last year, and we'd never met him, but he came to the show and brought us pumpkin pie."

And that may be the only sweet thing about this dude.