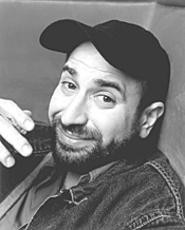 After 17 years of doing stand-up, comedian Dave Attell hit the big time by falling down. Often. And on TV. Drunk. His Comedy Central bar-hopping program, Insomniac With Dave Attell, is a cult hit. He hits a city at dusk, visits its bars, and then finds things to do at 4 a.m. "There are a lot of times I wake up with a hangover and just think it's some strange dream that I'm actually getting paid for this," he says.

Attell's in town Sunday for Comedy Central Live Starring Dave Attell and Lewis Black, a back-to-the-roots stand-up tour. "I'm usually in town for a day, do [Insomniac], and then off to the next city," he says. "But I'm still all up for sticking around and drinking with the crowd."

Creature Features
Cinema Wasteland scares the bejesus out of fans.

Even Ken Kish gets the creeps at Cinema Wasteland. The founder of the horror-movie expo takes cult-film buffs back to the drive-in era with screenings of 18 spooky feature films and several shorts. Fans can wave autograph books at art director Robert A. Burns (The Texas Chain Saw Massacre), Ken Miller (who was Vic the Bongo Player in I Was a Teenage Werewolf), and much of the cast from The Evil Dead (alas, no Bruce Campbell). Dealers will hawk movie posters, monster magazines, and other collectibles. "People like to be scared," Kish says. "And fake violence on the screen is a good escape from the horrors of the real world." Cinema Wasteland runs from 5 p.m. to 2 a.m. Friday, 10 a.m. to 2 a.m. Saturday, and 11 a.m. to 5 p.m. Sunday at the Holiday Inn Select, 15471 Royalton Road in Strongsville. Admission is $15; call 440-891-1920. -- Cris Glaser

Carnival of Sorts
Blossom piles on the chills and thrills.

In person, Ryan Pluta's not a scary guy. But when he brings the Carnival of Horrors to life at Blossom Music Festival, he may leave you with soiled drawers. The Fun House is a haunted mansion equipped with laser effects; the Freakshow provides 3-D glasses that enable the floors, walls, and ceiling to come alive; and the Wicked Woods is a flashlight-guided stroll through a monster-filled forest. "Don't expect to see anything coming," Pluta says. "Because you'll be alone [when] you try to escape." It takes place from 7 p.m. to midnight Friday and Saturday and 7 to 10 p.m. Sunday at Blossom Music Center, 1145 West Steels Corners Road in Cuyahoga Falls. Admission is $13; call 330-945-9400. -- Cris Glaser

Equipped with such a depressing title -- "The Empty Ocean: Plundering the World's Marine Life" -- does author Richard Ellis's lecture offer any hope for our wet and wild friends? Actually, yes. Despite the pillaging of natural nautical resources, many species are staging comebacks. Hear all about 'em at 7:30 p.m. Friday at the Cleveland Museum of Natural History (1 Wade Oval Drive). Tickets are $7 and $8. Call 216- 231-1177 for more info. -- Michael Gallucci