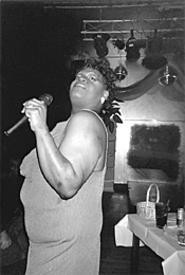 Cocoa Renée Starr never grants interviews. Those dimwit reporters never get their "make-it-up-as-I-go-along" stories straight. She's not as old as they say she is. Her glamour shots have never been airbrushed. And she certainly hasn't had her face superimposed on somebody else's body. "I'm keepin' it real," says Starr, breaking her silence after nearly 30 years as a female impersonator. "C'mon! Let's print up the right stuff."

For the record, Starr tells it like it is. She'll perform at only one bar (Club Decó). She'll share the stage with only a handful of other impersonators (Hershae Chocolatae, for one). And she'll dish on the pros and cons of being an illusionist. "The good thing is, when you get a bunch of girls together, and it's like, 'Okay, girl, I'm borrowing this.' And she says, 'No problem,'" says Starr, the first Cleveland impersonator to win a top-level drag-queen pageant as Miss Big & Beautiful National in 1985. "Then you have queens who think they're better than another. They trick you into coming into a bar, and then you're not welcomed with open arms by an audience that's so used to a certain set of [performers]."

Enough of that. Starr plays on her terms, on her time. If you don't like it, tough. And there's no holding back when it comes to proudly trumpeting her lifestyle. "That's what's wrong with a lot of the gay kids today," she groans. "They're so secretive about who they are and what they're doing. I don't have time for it."

Neither does her mother. Since going through the "Why me?" syndrome when Starr announced at 16 that she was gay ("I told her to get over it, and she said, 'You know, you're right'"), Mom's cheered on the youngest of her five children at many, many shows. "My mother always told me, 'The day you stop getting butterflies before you hit the stage is the day you stop doing it,'" she says. "The day I feel overly confident, that's the day I stop doing female impersonation."