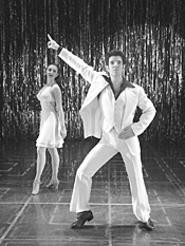 With all that booty-shaking going on, it's easy to forget just how much of a downer Saturday Night Fever really is. Teen pregnancy, suicide, desperate kids going nowhere fast -- that's heavy stuff. And none of it's lost on Tony Gonzalez, star of the touring production of Saturday Night Fever -- The Musical, which opens Tuesday at the Palace Theatre. "We're not as dark and depressing as the movie," he says. "We talk about all that stuff, but this is more about the brighter side of the story."

The show, based on the 1977 flick starring John Travolta, retains many of the Bee Gees' hit songs and its basic narrative -- and there's even more disco dancing. "People can relate to this a lot more than they can to something like Oklahoma!," Gonzalez says.

Don't let the title fool you: Sam Shepard's 1980 classic True West isn't about mule trains, saloon girls, and gunfights at the O.K. Corral. It's about screenwriter Austin and his hard-drinking brother Lee, who are holed up at their vacationing mom's Los Angeles house. Austin wants to be left alone to work on his script; Lee wants to case the joint to see what he can steal. That's when they go at each other with flying fists and acid tongues. "I'm shocked how little [foul] language is in it, considering how tense and dramatic and pretentious the play is," says Fabio Polanco, who directs the Fine Arts Association's production of True West. It's at the Shadowbox Theatre (38660 Mentor Avenue in Willoughby) Friday through February 21. Show times are 8 p.m. Friday and Saturday. Tickets are $15 to $42; call 440-951-6637. -- Cris Glaser

The last time EXO played Cleveland, drummer Doug Meis couldn't believe his eyes. The Chicago quartet, with its ultra-amplified atmospheric-pop sound, was inexplicably thrown onto a bill of heavy metal. "Normally, the room would clear, because we're not that kind of band," Meis says. "But we got a tremendous response." The band is on a Midwest hopscotch that brings it to town again Saturday to hype its second CD, The Safety Primer Justice. As Meis puts it, it's an 11-track "manual on how to get over the bullshit that comes into your life." EXO plays at Pirate's Cove (2083-1/2 East 21st Street) at 9 p.m. Tickets are $6; call 216-664-0867. -- Cris Glaser

What's in a Name?

The title alone of Rebecca Jones's latest work, Asshole, is worth the price of admission to Oberlin Shorts, Oberlin College's five-day festival of eight one-act plays written and directed by students and alumni. It runs from 8 p.m. Wednesday through Sunday, February 8 (with an additional 2 p.m. performance Friday, February 6), at Hall Auditorium's Little Theatre, 67 North Main Street in Oberlin. Tickets are $3 to $7; call 440-775-8169. -- Cris Glaser