After a break of three years, the Sea and Cake actually took time to rehearse for their new album. 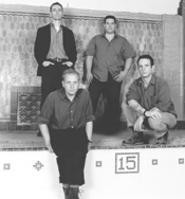 It's election day in Milwaukee, and Sam Prekop, singer and guitarist for the atmospheric pop quartet the Sea and Cake, has already done his citizen's duty and dropped his ballot into the great political maw that is the 2000 presidential race. His vote cast, he now turns his concern to the band's upcoming shows, the focus of which is the presentation of the band's latest album, Oui.

The Sea and Cake has already been out for three weeks at this juncture, and Prekop says that the shows, for the most part, have been good and getting tighter with each passing performance. Even considering a self-described "rugged" night in Minneapolis, the Sea and Cake has rarely been better prepared than it is at this moment to tour in support of an album.

Up to the release of 1997's The Fawn and the "Gentlemen" EP that same year, the Sea and Cake had been turning out at least an album per year since its inception in 1994. After the '97 material came out, the members of the Sea and Cake mutually decided to take a break from the studio, the road, and each other. That break wound up lasting three years.

"The break just sort of snowballed into a longer time than any of us would have thought," says Prekop of the lengthy hiatus. "If you'd talked to any of us after we'd decided to take a little break, I don't think we would have said three years. It wasn't supposed to be that long."

The Fawn was arguably the most successful Sea and Cake album that the band had ever released, and rather than try to emulate it, the band agreed that a different process would be called for on the next album. They just didn't realize that it would be three years before that process could be applied to their follow-up.

"I think that the main difference is a basic, initial approach to it," says Prekop. "We knew that we wanted to record it as a band in a room live, and The Fawn happened a lot differently. We wrote The Fawn in the studio, and this one we rehearsed quite a bit before we recorded it. The tunes were almost done before we went into the studio. Through that, we knew that it would make a different record. Not that we were against doing it the other way; we just wanted to take advantage of being a band."

The other circumstance that had an impact on the sound of Oui had less to do with the actual time spent apart and more to do with what the band did with the time. The hiatus was initially imposed due to drummer John McEntire's touring obligations to Chicago dream-pop aggregation Tortoise. (He was also busy building his own studio.) A number of other projects found their way onto the band's individual itineraries, including guitarist Archer Prewitt's second solo album and Prekop's first solo venture. In addition, Prekop and bassist Eric Claridge are both painters, and both used the break to create new canvases for exhibits they were assembling. The effect of this flurry of outside creative activity had to be felt somewhere during the Oui sessions, but Prekop is hesitant to make too much of the band's moonlighting.

"It's hard to tell specifically," he demurs. "I myself, through doing solo stuff -- especially since I did shows where it was just me -- I felt like I had to get better as a performer and singer. I feel like I made a lot of advances in the time off."

Another interesting wrinkle to the whole working holiday idea is the fact that Prekop and Prewitt worked closely on their projects together, a situation that Prekop considers crucial to the very existence of the new Sea and Cake album.

"It probably couldn't have happened if Archer and I had just stopped doing stuff together," says Prekop. "I think it's pretty important to stay up on it and keep thinking about how to make an even better album. I think that's why it worked out so well and why it wasn't a real long shot to get back together. Archer and I worked closely on my album and toured on it, so it never felt like we had stopped. The flow continued."

Prekop notes that the process of getting back together was substantially more organic than the original idea to push off for a while.

"It was sort of in the works for quite a while before we even began writing for it," says Prekop. "I was still playing shows this past summer. It was just a matter of lining up the schedules. Every year and a half, I feel like it's time to make another record. Either that or go get a job."

Once the band regrouped for the Oui sessions, it was clear that it was slightly altered from the band that had been on vacation a couple years earlier.

"What became interesting about working within the Sea and Cake context was that I noticed that we had a certain sound, or this thing that we do," says Prekop. "A sort of historical repertoire. With that new perspective, it was an interesting challenge to think about all the stuff that we had done. Without the break, I don't think that could have happened. It was interesting to think of this piece in respect to all the others and take advantage of that distance from them."

When the dust settled, and the Sea and Cake had Oui to show for it, there were plenty of reinforced consistencies and enough interesting departures to make the case that the time apart was worthwhile. The band's Brazilian subtext remained intact, as did the undercurrent of the great soul records of the '60s and '70s. Some of the departures included the sparseness of the arranging and a decidedly more simple approach to the writing, performing, and producing of this album.

With all of the success that Oui has generated since its release, and for all the care and deliberation that went into its sound and quiet fury, Prekop manages to toss a fascinating idea into the middle of Oui's reception.

"I also think that we should make another record, almost right away, or at least soon," he says. "Just to make sure that it's not like another reunion record. But now that we've gotten this one out of our systems, I think that the next record could be very interesting in another way."