Brian Straw is influenced by the random sounds of experimental composers. 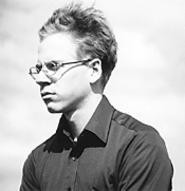 When local singer-guitarist Brian Straw decided to travel coast to coast earlier this year, he didn't embark on a conventional tour. He booked shows at art galleries, coffeeshops, small clubs, and any place that would welcome a guy, his guitar, and an effects box. He played New York's Knitting Factory, Washington, D.C.'s Black Cat, and San Francisco's Luggage Store, nationally recognized clubs that are safe havens for experimental musicians. But his goal wasn't just self-promotion.

He took odd jobs along the way, in part to finance the trip and in part as an attempt to build character. For a month, he worked on a boat off the Washington coast, cleaning, gutting, and sorting fish for 10 hours a day. And when the boat came back to port, he and the rest of the crew unloaded fish for the next two days. His arms were so sore afterward, he couldn't lift them above his head for several days. "It was horrendous," he says. "I was pretty seasick at the beginning."

While Straw refers to the trip as "wandering," it introduced him to underground music scenes in different cities and gave him a new respect for manual labor. With his wire-rim glasses and wispy blond hair, Straw looks and talks more like a young college professor than a hired hand. And he readily admits he wasn't physically prepared for the fishing boat experience.

"I had never put my body through that," he says, sitting in his loft above Speak in Tongues, the punk club on Lorain he helps operate with other members of a collective. "I wouldn't be entirely opposed to doing it again. However, I wouldn't recommend it to anybody."

Still, Straw sees unusual jobs as the kind of experiences that separate the boys from the men.

"You gotta do the fishing boat thing," he says. "The other thing you gotta do is work in a copper mine. I wanted to do that, too, but I didn't have a chance."

Straw, who grew up in Richmond, Indiana, started playing guitar at age 11 and performed in a rock band while still in high school. The son of amateur musicians -- his dad wrote ragtime piano songs, and his mother sang -- the adolescent Straw wasn't discouraged from playing his electric guitar loud enough to peel the paint off the walls.

But it wasn't until he went to Oberlin, where he studied electronic music composition, that Straw discovered John Cage and Karl Stockhausen, avant-garde artists whom he now considers among his primary influences. After only a year at Oberlin, he moved to New York and played briefly with a band called Reducing Valve. But because he wanted to pursue improvisational music and the other members didn't, the band dissolved.

"That was a weird time," he says. "Looking back on it, I don't really like what I was doing musically, and I don't really like myself personally. I took some things for granted -- some people in my life. And I let people take advantage of me, and I was stifled creatively because of those things."

He moved to Cleveland and immediately got involved with Speak in Tongues. He fine-tuned his music and released two albums, Backfeed Pools and Deliveries, both of which were recorded at his home studio above the club. He's recently released Once You're Lost You're Encouraged to Stay Lost, an updated version of Deliveries that includes several new tracks and rerecordings of old ones.

Speak in Tongues is what keeps Straw in Cleveland: He's plastered his apartment walls with posters from the many obscure bands that have played the club. Like most of those acts, his own music makes for difficult listening. One minute, he'll sing in a fragile baritone; the next, he's channeling distortion and feedback from his guitar. There's a strong sense of solitude on the album, which sounds as if it were written by a guy who spent too much time driving a van around by himself. Ironically, Straw wrote all the songs before his cross-country trip.

"My goal, I think, is to bridge the gap between complexity and simplicity, utilizing elements of noise, improvisation, and folk songs," he says, nervously bending his fingers. "When there's silence, I want there to be a reason for it. And when there's noise, it is meaningful in some sense."

While there's something ridiculous about music that portends to make meaning out of silence (see Cage's "4'33"), Straw says his music is an aural representation of solitude. Perhaps that explains the 30-minute track at the end of Once You're Lost. It's marked by strumming guitars and gaps of silence that last several minutes.

"It's about being alone, but not in the depressing sense," Straw says of the album. "People sometimes tell me my music is sad, but I don't think that's the case. It's about rising above and taking a step back to look at yourself and your place in the world, and then taking a step forward."