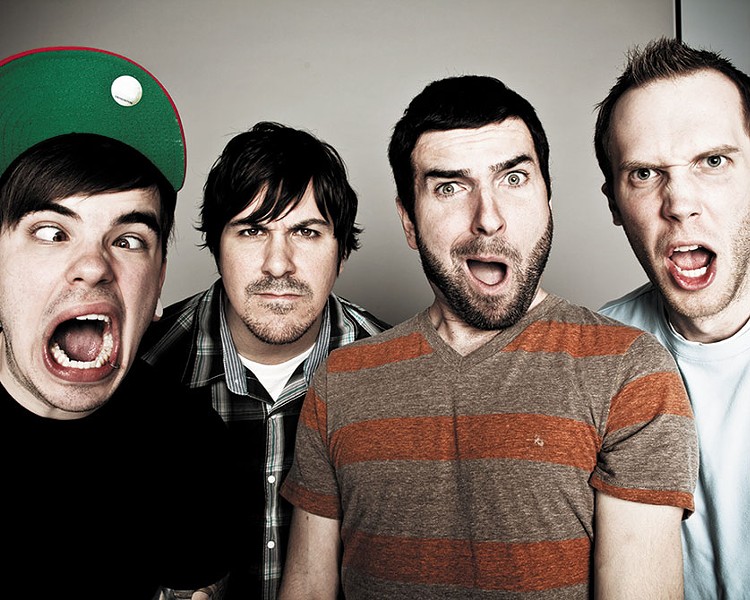 When the pop-punk band Stella Park (myspace.com/stellaparkrocks) hooked up with producer Dan Malsch in the Pocono Mountains to record "My Disaster" and "Heartbreak," two new songs they recently posted on MySpace, they almost didn't make it to the studio. "Our GPS couldn't get a signal," recalls singer-guitarist Jeremy Vandress, who formed the group in 2009 with guitarist Mike Rex, bassist Kevin Romanello, and drummer Alex Gabor. "We got lost and didn't get in until three in the morning." Malsch is now helping the band find a label, which shouldn't be too hard for the talented group, which plays a grown-up version of emo. "We're going for that Jimmy Eat World vibe, mixed with Yellowcard and Sum 41," says Vandress. "But we're definitely not one of those angular haircut bands." Their full-length debut is all ready to go. "We have everything figured out — from the songs and the track listing to the fade-ins and fade-outs," Vandress says. "It's just a matter of getting it down." Stella Park share a bill with Hawthorne Heights, Clemens, the Story Changes, and Anafair at 7 pm. Friday at Musica. Tickets are $10.

Indie record stores Music Saves and Square Records team up to host the annual Holiday Get Down at 9 p.m. Saturday at the Beachland Tavern. Cleveland indie rockers Cloud Nothings and Herzog play with Akron's Low in the Sky and Relaxer. Tickets are $5. Find more information at beachlandballroom.com.

Jazz singer Helen Welch (helenwelch.com) brings her Christmas Under the Stars show to the Akron Civic Theatre at 7:30 p.m. Saturday. Tickets are $10 and $20.

Hard-rockers Red Giant (myspace.com/ultramagneticglowingsound) play a free show at 9 p.m. Saturday at the Garage as part of the Inner Sanctum Concert Series. Go to thegaragebar.net for more info.

Indie rockers Above the Atlantic (myspace.com/abovetheatlantic) celebrate the release of their debut album at 6 p.m. Friday at the Grog Shop. Love & Fear, Sellin You Short, Christopher Wild, and Jordan Gable open. Tickets are $5.

Jam group the Jimiller Band (jimiller.com) bring their second annual Christmas Show to the Whitz End in Willoughby at 9 p.m. Saturday. It's the band's last local show of the year. Admission is free.

Singer-songwriter Kate Tucker (katetucker.net) plays a sort of homecoming concert at 8 p.m. Saturday at Musica. It's her first "full band show" since performing at Blossom Music Center as part of Lilith Fair last summer. Tickets are $10.

The 31st annual TubaChristmas comes to E.J. Thomas Hall at noon and 2:30 p.m. Saturday. University of Akron professor and event founder Tucker Jolly (yes, that's his real name) will lead a group of musicians through a series of holiday carols and sing-alongs at the free shows. Go to uaevents.com for more information.