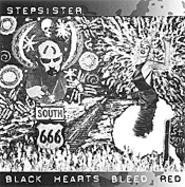 So much alcohol was consumed at Stepsister's shows that it can be hard to recall just how commanding this bunch was. Thankfully, this new collection of live and rare tracks is a reminder of Stepsister's vigor, blackouts be damned.

Formed by brothers Tom Dark and Scott Eakin in the late '90s, Stepsister came into its own at the turn of the millennium with the addition of bulldog bassist Tony Erba and guitarists Attila Caspo and Aaron Dowell. Equal parts soul and sweat, Stepsister made its mark with super-sized riffs and daredevil bass, with Dark hollering over it all like a schoolyard bully calling out the new kid. Black Hearts is highlighted by the band's 2001 split with Columbus ragers the Streetwalkin' Cheetahs and a screaming nine-song set recorded on Boston's WMBR in summer 2002. A mess of outtakes from the band's 1998 debut rounds out the collection like a knee to the nuts.