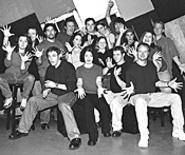 Cabaret Dada's Russel Stich estimates that more than 75 people have performed in Cleveland's oldest comedy-improv troupe over the past 10 years. He's predicting that most of them will come back this weekend to help celebrate A Decade of Dada, an anniversary edition of the annual party-performance the group throws for itself. "Once we find a formula that works, we like to stick with it," says Stich. "It makes the planning process a lot easier."

Of the six dozen or so actors and actresses who list Cabaret Dada on their résumés, only Stich has been a part of it since the start. Past cast members have moved on to improv troupes in Chicago and Los Angeles, graduate school, and even a life outside comedy. "We have people all over the place," says Stich, who landed a role in the local production of the long-running Tony n' Tina's Wedding thanks to his work in Dada. (The current cast includes 11 active members, though they rarely perform together.)

Friday and Saturday's blowouts will feature a free-for-all, with Dadaists past and present hogging the stage and looking to the audience for inspiration. Once all the yuks are drained on Friday, everyone -- including viewers -- will head to Panini's for an after-party with happy-hour drink prices. Saturday's midnight soiree at Dada's namesake theater includes free food, drinks, and live music.

Despite the constant turnover of regular cast members, not much has changed over the past decade, says Stich. "It's always a different combination of people and audience," he notes. "But we're still doing the same style of improv. We've messed around with things like long-form improv, but we have this Dada groove that's worked for 10 years. It's short, fast, audience-involved improv.