Carousel serves up a slick rendition of Grease. 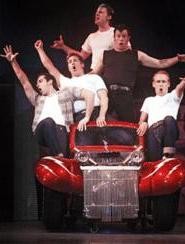 It's understandable that most guys don't spend much time talking about their hair. Unlike women, who generally have a lifetime of coiffures to choose from, the average man has only a few years to explore hairstyling options before he finds himself artfully constructing a comb-over in front of the bathroom mirror.

But for those with a suitable supply of follicles, there has never been a haircut to rival the "duck's ass" -- or D.A., for short: Combed straight back on the sides and ending in two wings in the back, this gravity-defying 'do required the owner to have certain elements to sell the look: swagger, disdain, and a metric ton of Brylcreem.

When Grease first opened on Broadway in 1972, everyone had a pretty fresh memory of the hoods in their own schools, a decade or so earlier, who were incessantly combing their lubed locks and readjusting their upturned collars, when they weren't filching hubcaps. But the further we get from that era, the more the show's Burger Palace Boys -- and their women's auxiliary, the Pink Ladies -- risk being transformed into pale replicas, thereby sapping energy from these icons of the Eisenhower decade.

This production at the Carousel Dinner Theatre generally avoids that problem and gets many of the details right, infusing the evening with a tumultuous momentum that serves the material well. Even though the singing voices are only acceptable (how can tiny Kalliope Stage in Cleveland Heights consistently find great voices, while Akron's huge Carousel sometimes doesn't?), this production takes some chances and winds up with a Grease that earns a four-Rattail Comb rating.

Since there is hardly an American alive who hasn't seen at least the movie version, starring John Travolta and Olivia Newton-John, the story is a given. Suffice it to say that the stud, Danny Zuko, has fallen for the fairy princess and newcomer, Sandy Dumbrowski, over the summer, and now they're trying to work out their love jones under the watchful eyes of their Rydell High classmates.

Even though Richard Roland (Danny) and Megan Nicole Arnoldy (Sandy) appear old enough to be holding down a couch in the teacher's lounge, they manage to give the teen duo a nice gloss. Their signature song "Summer Nights" has all the tender yearning and innocence that lay beneath the bravado of schoolkids in 1959. And their ending anthem of devotion has been changed from the stage original "All Choked Up" to the infectious "You're the One That I Want," borrowed from the movie version along with "Hopelessly Devoted to You." (This switch may offend any purists lurking about, but the fact is that those tunes from the flick are first-rate, and including them avoids letting down an audience that expects to hear the familiar riffs.)

Where the Carousel effort stumbles a bit are in the key roles of Kenickie and Rizzo, the experienced and jaded kids who are forcing Danny and Sandy to conform. As the only true juvenile delinquent in the gang (the rest are still addicted to the Mickey Mouse Club), Kenickie should be fierce and a little scary. But Jason W. Shuffler is more mellow than menacing. Even his car, "Greased Lightning," looks like an open-wheel Miata instead of a genuine pussy wagon, a car that wins drag races and also serves as a portable sex shack. Similarly, Jacqueline Colmer as Betty Rizzo doesn't have a wide-enough mean streak, even though she delivers some punch lines effectively. (Dork Eugene: "It's been nice talking with you, Betty." Rizzo: "Yeah, see ya around the Bookmobile.") Her rendition of "Look at Me, I'm Sandra Dee" is a half-beat off and not dripping enough sarcasm to suit this pubescent bitch-queen.

Director Ray DeMattis draws a slick ensemble performance out of the Boys, and their teasing and testing games ("Hey, bite my wienie!") feel authentic. Also, DeMattis wisely permits his Teen Angel (Kevin Smith Kirkwood) to go deliriously over the top in "Beauty School Dropout." Kirkwood turns in an R&B shout-out that starts slowly, but builds to a crowd-pleasing climax of candid stay-in-school advice to would-be stylist Frenchy ("Baby forget it/Who wants their hair done by a slob?"). Kirkwood also takes the lead as Johnny Casino in the best dance number, "Born to Hand Jive."

The show's energy is boosted by Robert Kovach's visually spirited set design, featuring stacked TV screens at each side of the stage, showing vintage images and ad slogans ("Bosco -- That's the drink for me!"). The main backdrop uses photos of James Dean and period cars to symbolize the gender fantasies at work among the characters, and Paul Black's lighting creates some lovely tableaux in the quieter moments. All in all, it's a very good Grease that, with a little more edge, could be great.