Still Waiting for That Train

A classic western, remade for our ADD times. 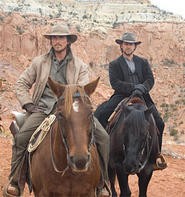 Huffing and puffing to resuscitate a long-moribund genre, James Mangold manages to imbue a 50-year-old western with the semblance of life. Mangold's remake of 3:10 to Yuma isn't as startling a resurrection job as his Johnny Cash biopic, but it does send a saddlebag full of western tropes skittering into the 21st century.

The original 3:10 to Yuma -- newly remastered for DVD in conjunction with the remake -- was an "adult" western, shot in black-and-white with a pair of second-tier stars, Glenn Ford and Van Heflin, as the charismatic outlaw and the beleaguered cattle rancher. (In the remake, the pair is reincarnated by Russell Crowe and Christian Bale.) Suspense trumped violence and chin music rivaled fisticuffs (much of the movie was confined to a single hotel room) as the rancher, not altogether willingly, assumed responsibility for ensuring that the outlaw boarded the train to the federal pen at Yuma.

Based on a story by Elmore Leonard, 3:10 to Yuma had an obvious kinship to High Noon, which appeared five years earlier. In both, a lone citizen is pitted against an insouciant criminal (and his gang), as well as confounded by a social order too craven to defend itself: A man's gotta do what a man's gotta do. If 3:10 to Yuma lacked High Noon's stripped-down drama, it strove for additional complexity in contrasting two American types: the stolid working-stiff everyman and the charming hipster sociopath. In one of its most resonant bits, Yuma juxtaposes Heflin's dutiful marriage with Ford's passionate seduction of a lonely barmaid.

Mangold sticks close to Delmer Daves' 1957 version, but includes a run-in with hostile Apaches and an interlude involving the construction of train tracks. The railroad, as personified by corporate official Dallas Roberts, is the real villain, indifferent to anything other than property value. "Notice he didn't mention all the lives I've taken," Crowe remarks when he's first arrested and Roberts recites his litany of crimes. Crowe's second-in-command (vividly played by Ben Foster) may be a sadistic nut job, but Crowe is a courtly gent with the soul of an artist. (Also the chops, as evinced by his post-coital sketch of the barmaid's naked back.) When a captor insults his mother, he chalks his vengeance up to chivalry: "Even bad men love their mamas."

Back in the day, America used the western to ponder certain things -- like the nature of right and wrong, and the basis of the social contract. Mangold's movie is certainly louder in its ruminations than Daves'. Like: How does a man get to be a man? The key conflict isn't even between Bale and Crowe, but between the ineffectual rancher -- who is not only hobbled by debt, but also by a leg wound suffered as a Union infantryman -- and his 14-year-old son (Logan Lerman). All it takes is one look at Dad's floppy hat, compared to Crowe's stiff-brimmed derby, to grasp the depth of the son's shame.

Mangold is always willing to crank up the volume. The opening stagecoach robbery is mega-ballistic: The coach has a Gatling gun, and a shotgun fired by one of Crowe's gang packs a bazooka's incendiary wallop. The ongoing body count dwarfs that in the original; the townspeople here are an even scurvier lot. The climactic final shootout unfolds in a virtual war zone -- which is not inapt, actually, in view of Bale's revelation regarding the origin of his wound.

Even blown up and out of proportion, the story still works. But what's lost in Mangold's rough-hewn exercise in barroom-brawl baroque is the original one-on-one. Much of the original consists of the outlaw testing and tempting his captors, the rancher in particular; by distributing Bale's burden among the other characters and emphasizing Crowe's physical prowess over his mental craftiness, Mangold weakens the movie.

For all his heavy lifting, Mangold can be a sensitive director of actors -- or at least a skillful one, having coaxed Oscar-winning performances out of Kewpie dolls Reese Witherspoon and Angelina Jolie (Girl, Interrupted). Crowe may be overly familiar as the charming outlaw -- it's a straightforward turn, without the crooked smile or shifty menace that Ford brought to the part -- but here, even more than in Rescue Dawn, Bale makes a credibly determined action hero, with Lerman notably unself-conscious as his angry son.

The movie's best performance, however, belongs to Peter Fonda. Tough, terrific, and totally unrecognizable as a bounty hunter, this cantankerous old hippie is so leathery he deserves his own line of rawhide apparel. Maybe, if the western ever does come back, he'll get a movie of his own.