Losing their instruments hasn't slowed down the Decemberists. 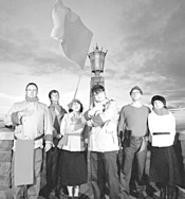 Even if they decide to pack it in and retreat to their Portland, Oregon homes for the next seven months, for the Decemberists, 2005 will be the most notable year in the life of the band. In March, they released their third and best album, Picaresque, a chamber-pop extravaganza that's one of the year's best CDs. A few days before the album came out, the band launched a tour in its hometown, where all of its instruments, amps, mics, and whatever else a band needs on the road disappeared. "The trailer was stolen," sighs frontman Colin Meloy, who theorizes that the thieves were looking for construction equipment, the target of a rash of similar robberies. "They were chagrined to find instruments."

Some of the items were found (drummer John Moen got all his stuff back); some weren't (most of keyboardist Jenny Conlee's equipment is still missing). "They discovered some of our gear in a meth lab," says Meloy. "Two of my guitars were found in a ditch on the side of a logging road."

In all, more than $21,000 worth of instruments was lost. The Portland music community rallied around the band and lent guitars, drums, and keyboards to keep the Decemberists on the road. Fans raised money on the group's website to help replace the stolen items. And finally, things are getting back to normal. "We needed time to recharge," says Meloy. "But now we need to move forward."

So they're back on the road, promoting Picaresque, a near-brilliant hook-filled indie-pop record. The album draws from Meloy's many interests. First, there's his upbringing in Montana. "As a kid, being in that environment, even though I thought at the time that it was oppressive, it helped fuel my imaginative leanings," he explains. "It's just a weird place, and you really do have to be creative to keep yourself sane. It had a powerful influence on my approach to life and making music."

For another, there's Meloy's obsession with nautical themes, which first surfaced on 2003's Her Majesty the Decemberists and swims in and out of Picaresque's 11 songs (including "From My Own True Love [Lost at Sea]" and "Mariner's Revenge"). Growing up in Montana, Meloy "was so far removed from that maritime environment that it was evocative to me," he says. "It was really exotic and fueled my imagination."

Meloy might also have the biggest vocabulary in indie rock. "And above all this folderol on a bed made of chaparral/She is laid," he sings on Picaresque's opening track, "The Infanta" (which we think is about a spoiled princess or something like that). "It forces you to pay attention," offers Meloy. "I think it's rewarding to come out the other end of it, having had a complete experience with the songs."

Still, Meloy insists, he's made a record for the MP3 era, despite the sprawling concept, the big words, and the demanding nature of the music (an accordion, hurdy-gurdy, and banjo were among the stolen instruments). "Far be it from me to challenge any new approach to listening to music," he says.