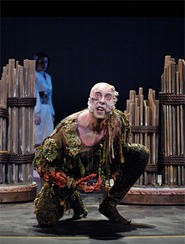 No matter how many centuries pass, people continually have a hard time figuring out who's in charge. Even President Bush, the leader of the world's most powerful country, chafes against the restrictions imposed by congressional inquiries and media investigations. As he once sagely observed, "If this were a dictatorship, it would be a heck of a lot easier -- just so long as I'm the dictator."

The quixotic nature of authority is just one of the issues raised in The Tempest, the last play written by William Shakespeare. Considered a poetic and insightful masterpiece, it also meditates on the vagaries of justice, the chances of utopia, and what a man will do for a nice slug of vino. Now being performed in repertory by the Great Lakes Theater Festival, this production has many stellar moments, but ultimately falls short of fully capturing the transcendent beauty that resides in those glorious lines.

True to the title, the play opens with a violent storm that is battering a ship carrying King Alfonso of Naples, his son Ferdinand, and a collection of other Italian big shots. We quickly learn, however, that the raging weather is no simple collision of pressure fronts; it has been conjured by Prospero, with the help of Ariel, an airy spirit and magically endowed gofer. Prospero, the former Duke of Milan and a bookworm magician, had his government stolen out from under him years before by his brother Antonio (who's also busy tossing his cookies on the ship).

Back then, Prospero and his baby daughter Miranda had been plopped into a small boat and set adrift, and were subsequently shipwrecked on a small island. Now, proving what goes around comes around, Prospero creates the storm to destroy the ship full of his enemies, so they can wash ashore and be under his control.

One of Prospero's schemes is that Miranda will fall in love with Ferdinand so that Prospero can get back into the familia, as it were. And once Miranda lays eyes on Ferdy, it's a done deal, since he's played by drop-dead handsome David Gregory, a guy who would look damn good even to a girl who hadn't spent her entire puberty on an isolated rock with her old man. As Miranda, Laura Welsh hyperventilates prettily in Ferdinand's presence.

Elsewhere on the island, skulduggery is afoot, as Antonio -- inveterate jerk-off that he is -- talks Alfonso's brother Sebastian into killing the king and his elderly counselor Gonzalo in their sleep, so Sebastian can rule Naples. But Ariel intervenes and saves the king's butt. As rendered by Sara M. Bruner, Ariel is sort of endearingly goofy, sprinting from here to there and then freezing in awkward, limbs-akimbo poses that suggest Martin Short's Ed Grimley character.

As in most of Will's romances, there is also plenty of comedy, provided here by two more survivors: dim-witted Trinculo (a barely restrained Jeffrey C. Hawkins) and a blotto Stephano (M.A. Taylor doing a rather forced Foster Brooks). It seems Stephano has stumbled upon a few goatskins of wine from the wrecked ship, and he winds up sharing his Chianti with Caliban, a monster who ruled the island until Prospero showed up and busted him down to slave. Lynn Robert Berg, scuttling across the stage like a mutant crab, is a richly entertaining Caliban who looks like part man, part lobster, and part lasagna left out in the rain for a week. Once he feels the effects of the wine, Cal pledges allegiance to Stephano for life (let this be a lesson to you).

Director Andrew May finds much of the humor in the script, but quieter moments sometimes aren't shaped as fully. Virtually no lines in the initial storm scene are understandable, given the loud sound effects. In the pivotal role of Prospero, Aled Davies is suitably regal as a deposed King, but early on, his scenes with Miranda and Ariel feel rushed and lacking in specificity. His Prospero gains in dimension later on, though, and his farewell speech is telling, enhanced by the immortal words, "We are such stuff as dreams are made on; and our little life is rounded with a sleep."

The show is presented on a basically bare stage, with two movable towering skeletal structures, looking like sections of a ship's hull, on which the actors climb. But set designer Russell Metheny's black masking curtains and an occasionally color-washed back scrim do little to establish an aura of a forested, primeval island. And a couple special effects, including a mysterious video clip of a toddler girl and a somewhat clumsy backlit silhouette of Ariel, do little to embellish the lyricism of the script.

While not a Tempest for the ages, the Great Lakes production manages to do justice to the enduring themes that make the play one of the most treasured in the Shakespeare portfolio.