The Old Angle offers a new take on Irish food. 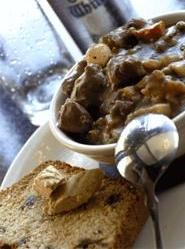 It's a Thursday night at Ohio City's Old Angle Tavern, and the joint is jammed. A knot of Celtic musicians saws away on fiddles near the front door, though the notes scarcely penetrate the smoke and noise. Visible in the happily inattentive audience are characters like the wiry little guy with curly red hair and a pugilist's mug, his faded Guinness T-shirt spray-painted across his pecs, and the white-haired gent in the black turtleneck, nursing a 12-year-old Jameson "1780" at the mahogany bar and winking at the pretty women.

They could be stand-ins from Central Casting, but the rollicking vibe is entirely real, free of pretense or puffery. While the Angle's name pays homage to a local Irish settlement, circa 1860, and the flat-screen TVs are often turned to Setanta Sports, owner Alex Gleason and his crew have wisely sidestepped most Irish-pub clichés and Disneyesque decor, opting instead for a dimly lit, well-appointed, and welcoming watering hole that might be the template for the contemporary Cleveland tavern.

After all, on the following Saturday, the place felt more like a mid-'60s college bar than a quaint Irish pub, the fiddles replaced by garage-rock CDs and college basketball playing on the tube. It was all good by us, as we ogled the small but well-chosen beer list. On draft, the six offerings included Arrogant Bastard Ale and Old Speckled Hen (both $5); among the 19 bottled brews were imports like Sterkens White Ale ($5), Bluebird Bitter ($6), and Weihenstephaner Hefeweizen ($5). "So many beers, so few remaining brain cells," a buddy murmured with delight.

Of course, a well-stocked bar is requisite for any self-respecting tavern; less expected is kitchen manager Courtney Telich's long, eclectic dinner menu, with offerings that range from chicken wings to hummus, fried polenta to potato-crusted tilapia, and lamb stew to flank steak and falafel. More surprising still, the kitchen pulls them all off with hardly a hitch.

Consider the sturdy lamb stew, as perfect a union of veggies, meat, and slow-cooking as ever one could yearn for; on the side, a thick slab of Irish soda bread, piqued with caraway seeds and dabbed with roasted shallot butter, adds hints of sweetness to the savor. To wash it all down, the crisp, citrusy Sterkens couldn't be a better match.

Other homey hits include the ample sausage sampler, sided with sweet-tart kraut, horseradish, and a highly seasoned mustard; the soup du jour, a pleasantly peppery broth crammed with diced ham, green beans, and potatoes, served with a hunk of warm French bread on the side; and the kitchen's ridiculously tender Angus-beef meatloaf, slathered with a savory mushroom and andouille-sausage gravy. Siding the meatloaf, garlic-rosemary mashed potatoes seems a little wimpy -- at least till the robust gravy lends them some stature; and while the crunchy green beans were undercooked when we sampled them, they were so beautifully fresh and utterly sweet that even now it seems churlish to complain.

(If we were to complain, though, we would whisper that pacing was slow on both our visits, and while servers couldn't have been more cheerful or well organized, they were clearly overextended; putting another staffer or two on the floor during busy times wouldn't be a bad idea for management to consider. And as for the secondhand smoke: We don't expect taverns to ban puffers, but the Angle envelops its patrons in an inescapable plume.)

Among other edible entertainments, well-dressed sandwiches range from burgers and corned beef to pulled pork and grilled cheese. Warm, lean roast beef, thinly sliced and generously topped with caramelized onions and blue cheese on a ciabatta roll, is a two-fisted champ, and crisp falafel patties (from Maha's at the West Side Market), wrapped in pita with hummus and spicy tahini mayo, offer a one-two punch of texture and taste. Even the humble grilled cheese turned out a winner, with plenty of American and Swiss, fresh tomato, and smoky bacon snuggled between thick slices of buttery grilled Italian bread.

Homemade pickles and fresh coleslaw contribute cool side notes. But maybe the best reason to order a sandwich is the tangle of hand-cut fries that comes with: Long and slender, they would do a county-fair vendor proud, especially when dipped into the tavern's tangy ketchup. Of course, a healthy alternative would be the oversized house salad, a toss of torn romaine, oven-roasted tomato, and crumbled gorgonzola dressed with just the right amount of light-tasting herb vinaigrette. (The guilt-free substitution adds a two-buck tariff to your meal.)

The tavern's signature dessert is the Car Bomb, a bombe of Bailey's mousse, Guinness ice cream, and pound cake, sliced, plated, and drizzled with a lip-smacking Irish whiskey sauce. "That name is in turrrible taste," we overheard someone grumble.

But inside the Old Angle, it tasted just fine to us.