Bowling is cool again, and all is right with the world. 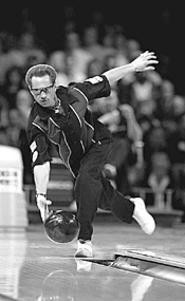 For years, the bad-boy antics of Pete Weber (pictured) embarrassed the Professional Bowlers Association. Not anymore. The trash-talking, crotch-grabbing Weber is now the poster child for the league's edgier image. "They're making it more exciting for the fans to get involved in the game," says Dawn Emerson, spokesperson for AMF Riviera Lanes, which hosts the PBA Jackson Hewitt Tax Service Open this week. The tournament gathers 64 of the country's best bowlers, all competing for a $232,000 purse. Three days of qualifying rounds culminate in the top four bowlers vying for the championship title on Sunday (broadcast live on ESPN). Balls will roll Thursday through Sunday at AMF Riviera Lanes, 20 South Miller Road in Fairlawn. Action starts at 11 a.m. and 6 p.m. Thursday; 10 a.m., 2:30, and 7 p.m. Friday; noon, 3:30, and 7:30 p.m. Saturday; and 12:30 p.m. Sunday. Tickets range from $15 to $75, available by calling 330-836-7985. -- Cris Glaser

Kirk Cambarare has finally figured out why he let his wife design their Strongsville home with a spiral staircase near the front door. The three flights of steps come in handy as he trains for Saturday's Tackle the Tower Stair Climb. Inside the 52-story Terminal Tower, runners will scramble to the 42nd-floor observation deck, then descend to ground level. To prepare for the up-and-down dash, Cambarare takes a 6 a.m. jog on his staircase every day. But don't remind his very pregnant wife about the wake-up call. "As crabby as she can be right now, she's not too crazy about my regimen," reveals Cambarare. "And she's really pissed that I let the dog run with me. But what can I do? Jake needs his morning run too." Climbing starts at 9 a.m. at Terminal Tower, 50 Public Square. Entry fee is $25; call 216-623-9933. -- Cris Glaser

Art Of the Deal

Whenever Gary Burkhart entered a Euchre Tournament in college, he relied on a superstition that always worked: If he and his partner were down by at least six points, they and their opponents wouldn't pick up their cards after they were dealt. Instead, each player got up and moved to the chair on his left before the game resumed. "You can also physically turn the table," offers Burkhart. "But we found there was a greater chance of tipping the beer bottles that way." Sunday's euchre tourney starts at 12:30 p.m. at Around the Corner, 18616 Detroit Road in Lakewood. Entry fee is $15, $25 for a two-member team; call 216-521-4413. -- Cris Glaser