Stumbles in the Falls

The Falls Grille shows plenty of promise, but also a few missteps. 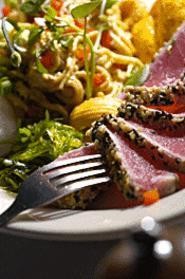 Tim Ogan sounds crestfallen. The chef-owner of the new Falls Grille has just learned that the flubbed Scotch egg salad that was sent back to his kitchen on an earlier weeknight had come from our table.

While the concept has potential -- hard-boiled quail eggs wrapped in sage-seasoned sausage, frozen until needed, then fried to order as the star of an ample mixed-greens and cherry-tomato salad -- the execution needs work, Ogan admits. Specifically, sometimes the sausage balls aren't being cooked long enough before serving, and the hard-boiled eggs inside are still frozen solid when they reach the table.

Experimentation is good, of course -- except, as in this case, when it tanks. But we certainly don't fault Ogan and his partner and former sous chef Josef Blaha for trying to have a little fun. In fact, "Food, Friends, and Fun" is their casual restaurant's motto, emblazoned right across the top of the lengthy menu; as anyone who ever dined at Ogan and Blaha's former haunt, the Grovewood Tavern & Wine Bar, may recall, these guys are all about showing their guests a good time.

The duo left the Grovewood a year ago; in mid-August they opened the Falls Grille in Chagrin Falls' former ChagTown Café. Apparently, the bar and grill's spirited blend of Asian, Mediterranean, and even Eastern European accents, served up in substantial portions at wallet-friendly prices, brings something new to the table for its affluent, middle-aged clientele: At 8 p.m. on a recent Saturday, for instance, the 105-seat spot was packed, and the wait for a table was nearly 30 minutes long.

Smart diners no doubt used that time to peruse Ogan's voluminous, annotated menu, made up of 16 amply sized starters, soups, and salads; 6 sandwiches, 19 entrées; 4 desserts; and a children's menu. Many of the dishes -- "killer" crab cakes, chilled sesame noodles, and paprikash among them -- channel memories of the chefs' Grovewood days. In addition, there's also a page of weekly salad, dessert, and entrée specials that, when we visited, included such dishes as beef goulash, veal cutlets "Bolognese," and stuffed brook trout, as well as that unfortunate Scotch egg salad.

Ogan apparently approached his menu-writing chores with a healthy dose of whimsy. Take his description of the mussels, "sautéed with white wine, a kiss of garlic, fresh basil, and . . . a light marinara for dipping your crusty bread," or of a special chocolate-chunk cheesecake, "with big chunks of dark and white chocolate looking at you in every bite." All that editorializing is generally considered a no-no in upscale salons, but even the most persnickety diner would admit that Ogan's words make a scrumptious starter in this laid-back setting.

Of course, there are drawbacks to all this verbiage, and the first one is this: If you're going to describe a dish in detail, then all the flounces and garnishes you describe had best be on the plate when it actually arrives. During our late-October visits, unfortunately, this caveat tripped up the kitchen repeatedly, resulting in a pulled-pork sandwich that arrived without the promised coleslaw, for instance, as well as stuffed pork chops served without the grilled vegetables and skewered bison "pinwheels" finished with only the barest trace of cactus slaw.

The other potential pitfall is that when menu descriptions are so mouthwatering, taste buds are primed for flavors as brisk, bright, and evocative as the prose. But here, again, the kitchen sometimes stumbled, turning out bland preparations with unfocused flavors that strained to live up to their advance PR.

Not that they were failures; they just lacked a certain zest. Consider the Acapulco Grill entrée, for instance. While the focal point of this bounteous preparation should have been the skewers of grilled tiger shrimp (smallish fellas, by the way, and served with their black intestinal veins still intact), the seafood was in effect hijacked by a massive accompaniment of rice, black beans, and spicy corn salsa, topped with cheese and ringed with tortilla chips. As a result, the overall dish was heavy and fairly repetitive, with flavors that edged toward muddy and bland, not playful and sharp.

The kitchen would do well to kick up its use of salt too. Yes, there are diners out there who shun sodium, so let them make their needs known when they place their orders. For the rest of us, judicious use of salt makes a huge difference in the taste of the final product, brightening and boosting naturally occurring flavors across the board. Here, though, we found ourselves reaching for the salt shaker repeatedly: to wake up an order of bite-sized lamb chops, for instance, as well as to enliven a special of apricot- and pistachio-stuffed pork-loin chops, and the mountainous mass of almost impenetrably dense mashed potatoes and parsnips that accompanied them.

On the other hand, there are always Ogan's spiced, chilled sesame noodles for those who want to put their taste buds through their paces. The Grovewood fave has followed its inventor to the Falls, losing nothing of its heady yin-yang interplay of sweet-versus-spicy flavors along the way. We had a big plateful of what Ogan now calls "Notorious Noodles" as a starter, where they were sprinkled with black and white sesame seeds, garnished with a pair of wooden chopsticks, and sided by a generous portion of crisp, cool seaweed salad; ample enough to serve as an entrée, the dish was a bargain, too, at a mere $6. (The noodles are also available as part of a seared tuna entrée or with a choice of grilled duck breast, sea scallops, shrimp, or salmon in Ogan's popular "yakitori.")

Other worthwhile starters included a pair of large risotto balls wrapped around a dab of finely diced shrimp, then rolled in panko crumbs and fried until they reach just the right balance of crisp and creamy; and strips of bison skirt steak, marinated in a blend of tequila, lime, cumin, and garlic, rolled into the approximation of pinwheels, then threaded onto skewers and grilled just past medium rare.

Among entrées, Ogan's version of mac and cheese proved hearty and flavorful, with its thick (and plenty salty) sauce of blue, cheddar, mozzarella, provolone, and ricotta cheeses. A variation on the classic BBQ pork sandwich also showed promise, with its matchup of pulled pork (sometimes prepared in-house, other times purchased ready-made), a dab of mild, homemade barbecue sauce, and a moist scallion crêpe in place of the standard bun. A bit more sauce that's a bit spicier would have helped this dish sizzle, but a tangle of caramel-scented sweet-potato fries and a dollop of sour cream made appropriate finishing touches.

We pretty much lost our taste for leafy greens after our run-in with the frozen-egg salad, but our waitress insisted we make a second choice. We demurred, then demurred again, but finally gave in to her entreaties to try the grilled Caesar salad, an enormous head of romaine split lengthwise down the middle and fired until the edges were carbonized, but the center remained cool and crisp. Drizzled with a packaged Caesar dressing, sided by a Parmesan tuille cup filled with oversized croutons, and garnished (by request) by two broad anchovies, the salad, while not awe-inspiring, tasted perfectly fine.

Turns out, the "awe" part was served with our check. While the waitress had been appropriately apologetic when she removed the Scotch egg salad from the table, we discovered, with some chagrin, that she had never removed its $10 price from our tab. True, she did not charge us for the Caesar salad that she pressed upon us in its place; but it would have seemed more reasonable to charge us for the $5 salad we ate, rather than for the $10 one we could not. (A more gracious solution would have been for both the inedible salad and the enforced substitute to be on the house.)

The fact of the matter, though, is that the Falls Grille is still young, and issues of preparation, pacing, service, and even the size of its wine list are yet to be fully resolved. We expect that both Ogan and Blaha have the experience and savvy to successfully tackle those problems; assuming they get it done soon enough, we wouldn't be surprised to find the Falls Grille become a real neighborhood gem.