The Starboyz keep one wheel in the cornfield and the other in the clouds. 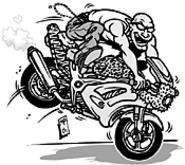 Kevin Marino pops a wheelie, lifting the front end of his Honda sports bike so high, the back of the motorcycle drags along the pavement. His taillight and bits of plastic litter the concrete, but no matter. Damage is part of the game for Marino and fellow members of the Starboyz, Northeast Ohio's resident motorcycle madmen.

The trio has achieved what may be the perfect blend of youthful invulnerability and entrepreneurship. On their website, the Starboyz sell jackets, patches, posters, and -- the things that started it all -- videotapes. They began taping themselves as a way to prove to the guys down at the bar that, yes, they do speed down the interstate while standing atop a motorcycle seat. On one foot. At night.

"You can't carry your bike around and prove it to everyone all the time," says Starboy Scott Caraboolad, who rides a bike festooned with fur. "After about half a summer, we had a decent amount of footage, and we cut it and put some music with it to give to our friends."

They ended up selling the tape at a local bike shop and, within three days, had moved 1,000 copies. "We got grandmas coming in to buy them for their nephews; we got little kids buying 'em. It was phenomenal."

The videos made the Starboyz so popular, the Akron-area residents now perform at events around the country, putting on shows before and after motorcycle races and participating in the occasional stunt exhibition. They also put on their own exhibitions, like the upcoming Stunt Fest 1-1/2 (the half because their first one was nearly rained out). The festival includes a motorcycle contest for both pros and amateurs.

"We wanted to offer a chance for everybody else that's in the stunt-riding industry to show themselves off," says Caraboolad. "If there's an average Joe living in the middle of a cornfield that has a lot of talent, it's kind of giving him a chance to get his name out."