A firefight in Congo matured Sum 41 in a hurry. 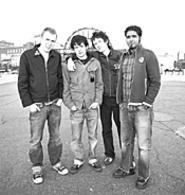 Don't you hate when wiseasses get all conscientious on you? Like when the loudmouthed troublemaker you've known since junior high suddenly turns vegan and starts doing that freaky twirly dance at Dave Matthews concerts. Look at Sum 41's recent conversion from goofy pop-punks to message-spreading saviors in a similar light.

Before last year's Chuck, in which the Canadian foursome goes on and on about the world's many injustices, Sum 41 was best known as the band that offered this revealing rhyme: "I like songs with distortion, to drink in proportion/The doctor said my mom should have had an abortion."

It was a trip to the Democratic Republic of Congo last year that opened their eyes. The band was there to make a documentary about the Civil War-damaged African state. "We went down to just film the effects of war and what happens to the people and to nature," explains guitarist Dave "Brownsound" Baksh. "We went to interview the people and just get a feel for what it is like to be in a war-torn place."

Before they knew it, Sum 41 was in the middle of a firefight. Guns popped, mortars dropped, and stuff exploded all around them. "We were stuck in our hotel, about 40 feet from where all the fighting was going on," recounts Baksh. "It was pretty hairy."

The group (along with about three dozen others) was ushered to safety by a United Nations worker, Chuck Pelletier. The new album was named in his honor. "He had no idea who we were," laughs Baksh. "Now we hook up and drink a bottle of Scotch together whenever he's home."

Yet the maturity bug bit Sum 41 before it even embarked on its life-altering trip. All but one of the songs on Chuck was written prior to the Congo adventure. Still, the brush with death informs nearly every song on the album, if you know what to listen for. "We're a little bit older now," says Baksh. "And it's just troubled times.

"Expectations of this band are super-low," he chuckles. "I don't know how this record is perceived. I just know that we like it. I'm just happy that we got to make three records."

The documentary Sum 41 was filming is now being edited. It should be released sometime later this year, hopes Baksh. The band itself is on tour again, performing songs from its first two albums, 2001's All Killer, No Filler (which includes its biggest and best song, "Fat Lip") and 2002's Does This Look Infected? But the band's keeping the focus on Chuck and its more politically astute look at life. "It's cool to have kids come up to us and ask us how they can get involved in these [political organizations]," says Baksh. "And the thing is, this was the easiest record to record. It was going to be called The Whiter Album or Hot Blonde Snooter Sandwich, something terrible like that.