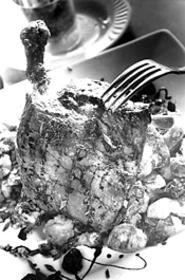 Back in 1994, Eminem was merely a candy, 45-year-old George Foreman became the oldest man to snare a heavyweight boxing title, and former President Richard Nixon caught the last train to the big White House in the sky. Meanwhile, on the local dining scene, formal Continental-style restaurants like Classics and the Riverview Room still held sway over "serious" diners, hardly anyone had heard of Michael Symon, and many Clevelanders were still warming up to the peculiar notion that dining out needn't be reserved only for special occasions.

Those were the days, too, when chef Michael Longo launched his Market Square Bistro in Bainbridge, with the then-radical intention of merging a casual, neighborly setting with sophisticated, upscale food. Inside his handsome suburban dining room, with its open kitchen and decor lifted right out of the Frank Lloyd Wright design book, the Culinary Institute of America graduate guided diners through sweetbreads and foie gras, roasted squab and Italian truffles, and escargot and lobster, along with chi-chi pastas, gourmet pizzas, and veal meat loaf. And lo, the locals loved it, packing the parking lot with their XKEs and BMWs (this was before SUVs, mind you), and reveling in the novel sensation of donning Dockers and crew necks to dine on salmon and veal.

Of course, Cleveland's state of the plate has come a long way since 1994. Nowadays, no one gets dressed up to go out, "casual-upscale" eateries are everywhere, and Michael Symon is on the freakin' television, for crying out loud. Plus, the economy is on the skids, "value" is the mantra of even the well-to-do, and tiresome though it may sound, in this post-September 11 world, everyone really is yearning for comfort.

All of which may have played some small role in Longo's decision, earlier this fall, to briefly close the bistro's doors and spend a fortnight tinkering with the menu, redoing the decor, and rechristening the bistro Firefly, a name intended to conjure up memories of carefree summer evenings. The changes are subtle but real. In the dining space, for instance, the hard-edged, geometric Wright stuff has been replaced by a softer, darker Arts & Crafts look, with wide oak moldings, leaded glass, and a frieze of 48 mystical landscapes, painted in foggy shades of green and gray. Interior lighting is dimmer now -- so much so that, from the outside, the place almost looks closed. Inside, however, candles flicker in front of a striking Amish-built sideboard, and thick amber light oozes out of mica-shaded wall lanterns, pooling on the carpeted floor. While the bare tabletops (sans linens, flowers, candles, or even salt and pepper) feel as stark as ever, and the small bar's wall-mounted televisions (visible throughout much of the dining room) still provide a jarring counterpoint to the otherwise-sophisticated mood, the overall ambiance is now snug and warm, making Firefly a perfect refuge from the long, dark days of winter.

Longo's current menu, too, is a profoundly comforting collection of seasonal delights, stocked with evocative ingredients like sage, wild mushrooms, and butternut squash, and dishes with names like Slow-Cooked Pot Roast, Jack o' Lantern Stew, and Campfire Trout. Even better, while many favorite dishes from earlier menus have been carried over (the rich, smoky M.L.'s Macaroni & Cheese, for instance, and the crisp, Asian-accented Wonton-Wrapped Tiger Shrimp) and portions remain impressively large, prices have actually gone down by a few pennies. In the case of that mac & cheese, for example, the 2000 tariff was $14.95; today, it's a mere $14.

Of course, there really is no free lunch, and what has been lost in the price rollbacks is the house salad, which used to be included with all entrées. Now, salads like the oh-so-sassy Baby Red Oak Salad, tossed with toasted walnuts, roasted pear, and Maytag blue cheese, are strictly à la carte. The upside, though, is that cost-and-calorie-conscious diners, with no time to cook, can now drop by on a Tuesday night, say, choose a glass of wine from the well-composed wine list, dine on the evening's special chicken pot pie, and maybe still go home with change jingling in their pocket from a $20 bill.

It's also worth noting that Longo has never been a chef to tiptoe around big tastes. At his most restrained (and here we're thinking of a Thursday special of succulent roasted turkey, piled on a snowy bank of mashed potatoes, sided with sage-and-thyme-infused dressing, draped with translucent gravy, and topped with a sheaf of barely cooked baby green beans), he nonetheless builds dishes of strong, assertive quality. Conversely, at his most exuberant -- as in an entrée of plump butternut-squash-filled ravioli, slathered with olive oil, garlic, basil, and Romano cheese, and tossed with sliced smoked duck, sun-dried cherries, and pistachios -- his busy, energetic creations threaten to vibrate right off the plate.

Besides traditional "big plate" entrées, the kitchen's other classy comfort is its light-crusted pizzas, baked in a wood-burning oven and topped with such savories as barbecued chicken, roasted peppers, and chèvre. We shared a dark, earthy wild-mushroom version one night as a first course; piqued with sage, roasted garlic, extra-virgin olive oil, and mozzarella and Romano cheeses, the little 'za was like all of autumn on a plate.

To complement this richly sturdy fare, Firefly's 175-bottle wine list is serious and thoughtfully constructed, containing Italian, French, and American selections, with emphasis on well-respected West Coast wineries like Hess, Liberty School, Mondavi, and Opus One. Besides the by-the-bottle choices, the restaurant also offers almost two dozen wines by the glass, the half-liter, or the liter. One night's half-liter of Robert Mondavi's smooth-as-silk 1999 Napa Valley Cabernet Sauvignon ($35) was entirely too complex and full-bodied to go with our humble pot roast, we decided later, although we loved it just the same. Next time, we'll pair up this beauty with one of Longo's sizzling steaks and let the fireworks begin.

The menu's autumnal influence carries over to the kitchen's homemade desserts, where sweeties like a warm apple turnover, joined on a white rectangular platter by caramel sauce and Mitchell Brothers pumpkin spice ice cream, shake hands with longtime favorites like Longo's remarkably light sun-dried-cherry- and white-chocolate-laced bread pudding. Apparently, Mother Longo is no slouch in the kitchen, either: Her sleek, sour-cream-topped cheesecake was one evening's featured dessert, and decked out with raspberries, strawberries, and a soupçon of fruit juices, it scored a sweet K.O.

If there was one thing about Firefly that bugged us, though, it was the service. During two visits, friendly staffers swarmed about the room, but seemed to accomplish surprisingly little. We were greeted warmly, but waited nearly 20 minutes before a server actually buzzed on over to take our order; our empty water glasses became as dry as panko; and we had to nearly beg to get our leftovers boxed at meal's end. Despite those annoyances, however, with its embracing food and cozy ambiance, Firefly casts a warm glow on the cold-weather landscape. And like moths to a flame, diners are likely to be drawn here again and again.