Reality is twisted until it screams truth in the excellent Far Away. 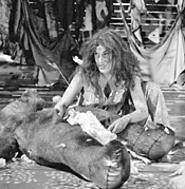 In 2000, we successfully weathered the non-disaster of Y2K, the Supreme Court appointed a seemingly middle-of-the-road President, and the world seemed in tune. But during that year, famed British playwright Caryl Churchill was tormented by visions of a world gone mad. The stunning and unforgettable play she wrote, Far Away, was not only eerily prescient, but it was a clarion call to people of conscience. And now, this brief (under an hour) but monumentally powerful piece is being given a strong showing at the Cleveland Play House.

The play begins as a girl named Joan (subtly played by young Angela Holecko) wakes in the night, frightened by sounds that seem like human yelps. "It's only an owl screeching," comforts her Aunt Harper. But young Joan isn't mollified, and we learn that she's seen and heard much more. There's blood on the ground outside, wailing people being herded into a shed, and her uncle is beating adults and even children with a metal pipe. But Harper (Derdriu Ring, in a chilling turn) has an explanation for every atrocity the girl has witnessed and puts her back to bed, assuring her that "we're on the side of people who are putting things right." Sound familiar yet?

The next scene jumps ahead a decade or so, when grown-up Joan (innocent and eager Cat Maddox) is punching the clock in a government hat factory where they design fanciful, Dr. Seuss-like chapeaus for parades that occur every week. There she meets veteran milliner Todd (a glibly unaware Matthew Joslyn), who grouses about his burnout and spends his off hours watching trials, the subjects of which are never mentioned. This is the moment Churchill's subversive genius grabs hold, for just as the audience acclimates to the mundane thrust and parry of the co-workers' banter, the true and ghastly nature of the parades is revealed. Referencing a horrific image from the mid-20th century, Churchill shows how average people's desire for a paycheck, some creative expression, and a little recognition can easily be put to the service of evil.

But it is the concluding scene that demonstrates Churchill's fervid imagination and her mastery of gloriously illogical dialogue. The time has leaped ahead a few more years, Joan and Todd are married, and they are sharing Aunt Harper's hovel, against her wishes, in the midst of a world gone completely berserk. It's a universe where everything, animate and otherwise, has taken sides. Deer and crocodiles have teamed up with Latvian dentists to pose a mortal threat, children under five are attacked on sight, and even a river's allegiance is in dispute. One asks, "When did it all go wrong?" Another answers, "When the elephants went over to the Dutch." (And remember, this was written before 9-11 and the Bush administration's "with us or against us" stance.) Churchill's topsy-turvy perspective seems absurd until you compare it to our current reality of contorted rationalizations and "us against them" politics.

This challenging work is staged with flair by director Peter Hackett and, in particular, scenographer Pavel Dobrusky, whose magnificent set consists of wooden slats on which are painted reproductions of Americana-drenched art. These planks -- which hide and sometimes reveal light, smoke, and mysterious machinery -- extend upstage and then curl upward to crest in a tsunami of New England goodness and normalcy. It is a perfectly discordant companion to the surreal brutality that permeates the script. Sound designer Robin Heath's precise and frequently ominous sound effects contribute mightily to the unsettling atmosphere. Director Hackett paces the short play deftly and falters only by not capturing the full horror of the parade shocker -- and by making the final scene excessively murky and (nudge, nudge) visually apocalyptic.

This is Hackett's final directorial effort in his 10-year tenure as the company's artistic director and, although his stewardship has been spotty, this production is a splendid exit. It embodies what the Cleveland Play House should provide as the city's leading theatrical troupe: creative courage and thorough professionalism. As for the play itself, it will lodge in your mind like a burning coal. At this time of free-floating paranoia, it reminds us that living only in response to our fears can lead down a terrible path.