Aroma smells, and feels, like a warm Italian home. 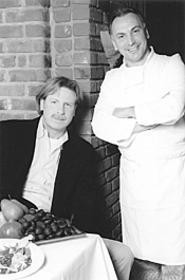 Like a lover's crooked grin, a single cloud in an otherwise flawless sky, or a smudge on your new Strokes CD (okay, scratch that one), a little imperfection can be a charming thing. At least, that's the way it works at Aroma, Marco Rossi and Mario Marotta's welcoming new Italian restaurant in Avon Lake. Outstanding food and doting staffers outweigh some minor eccentricities.

The first is geographical. Next door to an out-of-business movie theater and across the street from the monstrous hulk of a power plant, the location is improbable. But for all that, the destination (at the eastern end of a former shopping plaza, now optimistically repositioned as "Artstown," a small collection of galleries, studios, and performing arts spaces) is unexpectedly handsome, blessed with a sort of timeless gentility by its worn brick walls, Italian tile floors, and graceful arched passageways.

Both Rossi and Marotta are big-city boys, and it seems strange to find them at this out-of-the-way location. After all, the suave, slender Rossi -- perhaps Northeast Ohio's only six-foot-tall, sandy-haired Roman maitre d' -- is known for bringing almost legendary style and grace to fine-dining rooms from Little Italy to London. And chef Marotta, a native of Salerno, had quite the following among office workers, including Scene employees, in his café and catering business on West Ninth Street. Still, downtown is an expensive and competitive venue for a new restaurant. It's really not all that surprising, then, that when the duo finally decided to launch their own dining room, the search for a space led them here, where the rent is relatively low and the competition is nearly nonexistent.

Long and skinny as a Pullman car, the 60-seat restaurant is loosely partitioned into three separate dining spaces. A precise column of white-draped tables hugs each wall, leaving but a narrow path for Rossi and his staff to hurtle down, on their way to and from Marotta's compact kitchen. Artful halogen pendant lamps dangle over each table, emitting a flattering golden light; and the occasional phrase of background music can be heard above the celebratory sounds of laughter (fueled, we suspect, at least in part by the long menu of fine Italian wines).

Still, it must be admitted that the unobstructed view of the surrounding parking lot is less than entrancing. (Rossi, who has been known to refer sardonically to the restaurant's "ocean view," promises that some type of window-covering will be installed, at least for the colder months, when the view is especially bleak.) And considering that we melted on a Thursday night and froze on a Saturday, the HVAC system seems temperamental, too.

Yet when Rossi leans in close to take an order, violating our personal space in the most enchanting European fashion, or when a solemn-looking Marotta, dressed in crisp chef's whites, leaves his kitchen to work the tables, only a curmudgeon would complain about the lack of curtains or fret about the heat.

Plus, of course, there's the food, luscious Italian fare ranging from the rustic (sweet cantaloupe draped with sheer sheets of prosciutto, for example) to the refined (pan-seared sea bass, sweet and firm enough to pass for lobster).

Soups, sauces, dressings, and most of the desserts are made by Marotta, and at least to this third-generation Italian's palate, the man is channeling Nonna's kitchen. As my grandma did, he begins with the finest ingredients: perky produce, imported cheeses and pastas, and the freshest meats and fish. And again as Grandma did, he understands that if one handles these items respectfully, combines them intelligently, and seasons them assertively, the results -- dishes such as a delicate zucchini-blossom frittata, say, garnished with fresh sage, or al dente ravioli, stuffed with crabmeat and refreshed with a drizzle of lemon oil -- are almost bound to be outstanding.

The long menu begins with 14 antipasti, including carpaccio of both salmon and beef, and two versions of calamari -- grilled with rosemary, or sautéed with tomato and garlic -- as well as that simple-but-compelling melon-and-prosciutto dish, garnished with a scattering of shiny pomegranate seeds. We also began one visit with the perfectly grilled portobello mushroom cap, generously topped with crabmeat and imported Parmigiano-Reggiano, and garnished with roasted tomato and slender ribbons of roasted pepper; it's no wonder that this dish -- mysterious, complex, and full of dark, smoky flavors -- is one of the kitchen's most popular items. On another night, we began with a stuffed red pepper (one of the evening's specials), filled with tender, greaseless ground veal and pork, and settled on a roasted tomato sauce. Even though it arrived at the table no more than lukewarm, our consternation faded at the first bite: So arresting was its freshness, and so graceful the balance of savory against natural sweetness, that we had to agree when a companion declared it "the best stuffed pepper ever!"

Tempting pasta dishes include rigatoni with broccoli, sausage, and cherry tomatoes, and spinach gnocchi with mascarpone, among many others. (As with all the main courses, pasta dinners include a crisp house salad -- topped with goodies such as capers, roasted peppers, olives, or artichokes, and tossed with an herby balsamic vinaigrette -- and a breadbasket filled with crusty, whole-grained pain rustica, with pepper-and-rosemary-flecked olive oil for dipping.) Besides the fragrant crab-stuffed ravioli, in a subtly creamy tomato sauce, we can also recommend the Reginette di Magro Emiliano: long, ruffled pasta in a light, vaguely sweet, and startlingly fresh tomato sauce with ground veal and beef -- sort of a lean, fit cousin to the more ponderous Bolognese sauce.

Among carne and pesce options, Saltimbocca alla Romana was several cuts above average, with exceptionally tender scaloppini of veal, a few curls of salty prosciutto, and a smidgen of buttery white-wine sauce, all laced with lemon and rosemary; an ample platter of rigatoni, simply dressed in olive oil and garlic, was served on the side. An eight-bone rack of grilled New Zealand lamb was also noteworthy, not only for the rich, rosy meat, but also for the bed of chunky mashed potatoes and tender-crisp carrots and green beans upon which it rested; a garlic-and-rosemary-scented jus was the final fitting touch.

Both a cheese platter (an assortment of regional Italian products, served with honey and aged balsamic vinegar) and a fresh fruit platter are on the menu, and we had considered ending our meal in this fashion. But after all that came before (not to mention the wine -- one night a bottle of smooth, juicy 1999 Barone Riscasoli Chianti Classico Riserva "Rocca Guicciarda," at $37; another night a half-bottle of light, sparkly Prosecco Brut Mionetto, at $16), our appetite for such substantial fare was justifiably diminished. So we went for the sweets -- a massive slab of firm, cocoa-covered tiramisu; a wedge of light, lemony, pignoli-studded spongecake, its layers divided by a thick band of Grand-Marnier-tweaked whipped cream; two petite, not-too-sweet ricotta-and-cinnamon-filled cannoli; and orbs of pistachio gelato, imported from Italy and served with whipped cream, an orchid blossom, and more glistening pomegranate seeds as a garnish. Freshly brewed coffee, cappuccino (which could have been hotter), or better yet, café au lait (Rossi's specialty) provided the final taste of goodness.

The same European sensibility that informed the menu seemed to extend to the service, which was courteous and embracing, but a trifle slow-paced -- especially when it came time for the check to arrive. However, we noted the same lag when we visited Rossi's previous dining room, the similarly authentic Osteria de Valerio and Al, and can't help suspecting that the problem may reside less in the service than in our all-American inability to relax.

Of course, it's not much of a stretch to cast Rossi and Marotta as genial Italian uncles and a meal at Aroma as a party in their gracious home. That being the case, would you tell Uncle Marco to get the lead out? We didn't think so. Neither will we.