How Trevor Crowe became the Indians' next great hope. 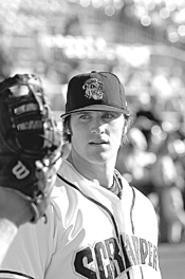 The two smallest boys on the field are standing near the dugout, the sun heavy on their backs. The taller boy is telling the smaller one about the sweet spot of a baseball bat. He's explaining that if you hit the ball just like so, the ball will go hard and far, and good things will happen.

The smaller boy doesn't seem to care. He is just four feet tall, a batboy no more than seven years old. Learning the intricacies of the sweet spot is not on his immediate to-do list.

But for the taller boy -- Trevor Crowe, 5 foot 11 and the recent first-round pick of the Cleveland Indians -- the sweet spot is his life. He will tell anyone who will listen.

It has been like this for as long as anyone can remember: Trevor Crowe, one of the smallest players on the field, thinking and talking about hitting. On this July afternoon, he is in Niles, Ohio, playing for the Indians' Class-A Mahoning Valley Scrappers, in one of his first professional games. His brand-new Hummer is outside, tucked between a Taurus and a Sunfire, in a parking lot shared by JC Penney and Target. The battle-ready SUV was the first purchase made with his $1.7 million in new riches.

The Indians hope that Crowe, who is 21 years old, will claw his way through the minor leagues and quickly become a fixture at the top of their lineup. Because of his success at the University of Arizona -- he hit .403 and was on base almost 50 percent of the time last season -- they consider him a low-risk pick. He has a "very strong track record," says John Farrell, the team's farm director. "You try to minimize risk as best as possible."

Or, as Crowe puts it himself: "Organizations that are up-and-coming are looking to build value. Having tools is great, but you better invest in guys that produce."

This is a concept Crowe had to teach himself if he wanted to go from where he was -- a scrawny high-schooler in Portland, Oregon -- to where he is, preparing for batting practice as a professional center fielder. He became obsessed with hitting as a boy, when he noticed a batting cage in a video arcade and made his dad pump in dollars, while he took hack after wild hack.

Crowe was among the best teenage racquetball players in the world. But in high school, he shelved his racket to pursue baseball. He took hundreds of cuts each day, off a tee in his garage or in the batting cages at his high school. He went home at lunch to hit and had his own key to the high school cage. His coach, Jeff Shull, lived only a seven iron from the school. Late at night, Shull "could hear the ping" of ball meeting bat.

"I knew it was him," he recalls. "None of the other guys would do that."

Crowe knew his size would work against him; baseball scouts typically fall for players over six feet tall. So he taught himself to build his value. Teams were starting to pay attention to more than size and power. Statisticians were infiltrating front offices, talking about on-base percentage and other obscure numbers.

Crowe worked with personal trainers to increase his speed and strength. But he also taught himself patience and selectivity -- how to swing only at pitches with which he could make good things happen. He became an impossible out.

After high school, he was drafted in the 20th round by the A's, but turned down Oakland's contract offer to play for Arizona instead. Once in college, his obsession with hitting only intensified. Teammate Chris Frey says the players constantly had to wait around after games for their center fielder. They'd be dressed and ready to leave, to go get food and beers, and Crowe would just be finishing up in the batting cages. In the off-season, Frey says, he and Crowe spent so much time breaking down video of their own swings, "It got to the point where it was like, 'What are we doing?'"

When at bat, Crowe had the patience of a kindergarten teacher. But outside the batter's box he was a kindergartner, unable to be slowed. Even after games in which he rapped out two hits, he would head to the cages, cursing his less-than-perfect at-bats.

After three years of swatting around Pac-10 pitchers like fruit flies, Crowe was selected by the Indians in the first round -- 19 rounds higher than the A's had picked him three years earlier. In June, he arrived in Mahoning Valley for a short stint with the Indians' lowest-level farm team. They told him that he would be called up quickly to the higher-level Class-A team in Eastlake. He was a pro on the rise, a freshly minted millionaire with a jaw that could crack a safe and eyes so blue you could mistake them for a Mexican lagoon. Oh, and there was an SUV the size of Idaho waiting for him out back. Good things were happening.

But not at the plate -- and for Crowe, life exists at home plate. After several games, he was hitting .176. For a decade he had hit near .500; he'd probably forgotten that averages even went that low. So he did everything he could think of to fix it.

In a lead-off at-bat in a game in early July, the switch-hitting Crowe stood nearly on top of the plate. He was almost begging the pitcher to plunk him.

The pitcher slipped five straight pitches on the inside corner. They were all strikes, or close to it, but Crowe jumped away each time, and the umpire called four of them balls. He wasn't hitting, so he improvised, like a crooner who had misplaced his song sheet. And he was standing on first base, right where the Indians want to see him.