Clevelanders bask in the summer sun on Lake Erie's most polluted beaches. 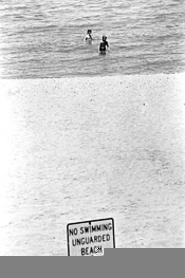 Beyond the stands of trees in Euclid's Sims Park, stairs lead down to one of the stretches of sand where Clevelanders soak up summer. A few moms and their kids cavort in the water, unaware that they're at one of the dirtiest beaches on Lake Erie.

Under a pier at the end of the beach, a storm drain lets out a mix of rainwater and raw sewage. The next day, a test shows the lake water is full of bacteria, which comes mostly from human waste. The amount of bacteria is seven times what's considered safe.

Joan Yanacek walks out of the lake carrying a green foam water noodle; her 13-year-old daughter, Holly, follows. "My parents warned me against coming to the beach," says Yanacek. "They said, 'Why don't you go to the pool?'" But she lives in Euclid and wants to enjoy its parks. She knows bacteria levels in Lake Erie are often high after rain, and she isn't alarmed. "We're going to all die from something or another," she says. "It doesn't concern me."

But down the beach, Tony Jefferson is staying out of the water. "I was deliberating whether to go or not," he says. Hearing about the pollution makes him glad he didn't, and he worries for others. "You think about the little kids down here who don't know anything about it."

In summer, as swimmers dive into Lake Erie, government health workers dip into its waters for samples, looking for bacteria from human feces.

Every year, four billion gallons of "combined sewer overflows" -- a mix of rainwater and sewage -- flood into Lake Erie near Cleveland. Old sewer systems are the main culprit. In some, storm water and raw sewage run through the same pipe. When big storms overburden the system, some of that mix of rain and waste empties into the lake untreated. In other areas, storm and sewer lines run through the same trenches and manholes, and the raw sewage can still gush into the storm lines during heavy rains or when sewers back up. Fecal bacteria in the sewage can cause stomach flu and diarrhea, most likely in younger children, the elderly, and others with weak immune systems.

The problem is worst on the East Side, since pollution from the city flows east with the current. At Villa Angela State Park in Collinwood, small signs warning people of high fecal bacteria levels were posted for 61 days last summer and for about half of this summer, the most of any Cleveland-area beach. Villa Angela is only a mile from the Easterly sewage treatment plant, which alone lets out almost 800 million gallons of combined sewer overflows per year.

Beaches on the edges of Greater Cleveland have the least pollution problems. Huntington Beach in Bay Village and Mentor Headlands in Lake County have yet to post signs this summer. The West Side's Edgewater State Park had signs up for most of last summer, but only a few days this year.

The warnings at Villa Angela don't deter many people.

"People ask us questions," says Danielle Kos, a Villa Angela lifeguard sunning herself next to her guard's chair. "'We don't recommend you going in it,'" she cautions them. "But they go in anyway."

Dennis Knight walks up the beach with a can of Canada Dry and a copy of Zen and the Art of Motorcycle Maintenance, sporting a sunburned chest and wearing swimming trunks, sandals, and a straw hat. He didn't see the bacteria advisory. "I don't think it would have stopped me, though. I live close. I try to get down here one or two hours a day. You can't ride the Harley all the time."

Knight, taking a few weeks' break from his work as a stagehand, has never gotten sick after swimming at Villa Angela. "It's really a great beach," sandier than others because of its six rocky breakwaters.

At Sims Park, swimmers ignore no-swimming signs on the unsupervised beach and also a sign along the driveway warning that heavy rains hurt water quality. But Joan Yanacek figures that, if the lake really were dangerous, Sims Beach would "have not only no-swimming signs, but skull-and-crossbones signs."

Steve Binns, who supervises beach testing for Ohio's parks system, says he would swim in water with the fecal bacteria counts of Villa Angela's. Healthy adults probably won't get sick, he says, but parents should warn their children, "Don't drink the water, don't eat the sand." Still, "the longer the signs stay up, probably the less you really want to spend as much time in the water."

It's a dilemma Clevelanders have always faced in the summer: the temptation of a gorgeous lake, countered by the danger that hides within.

Cleaning up the lake will take time. The regional sewer district is busy trying to cut down the amount of human waste it lets into the lake, boring the first of many giant tunnel-reservoirs to hold back storm overflows. But it may take 20 years and cost up to a billion dollars to come close to eliminating the flow of waste.

Euclid sewer workers have discovered why the storm conduit under the Sims Beach pier was letting out waste: a backed-up sewer pipe across town was plugged with a clot of resolidified soap. They've washed the pipe out; another rain or two should flush out the remaining sewage.

Cherise Parker, 28, is swimming with her young sons when Sims Beach is at its worst. She comes to Sims about once a year, and she and her kids have never gotten sick from swimming there. But there have been times when her family has taken a boat to a private beach near the Easterly treatment plant, and they've felt nauseous and dizzy after swimming there.

"That's nasty," she says when she hears about the sewage at Sims. She'll look for a cleaner beach next time. "We're going to take a shower now."