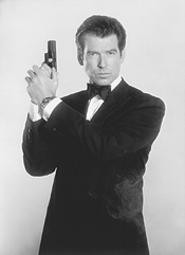 Poor old MGM -- the once-golden studio that has been battered and abused by ever-changing ownership and management for nearly three decades now -- still has one sure-shot franchise among its assets: the James Bond series, whose longevity is astounding. If nothing else, the series' overseas popularity keeps the films profitable, even when their domestic take wanes. Actually the property of United Artists, which long ago merged with MGM, the series appears officially under the latter's logo for the first time with The World Is Not Enough, the 19th "official" 007 feature to date.

The World Is Not Enough? Really? Enough for what? Bond titles have frequently made no sense whatsoever, though the current one at least appears in the film in a logical context, which is more than can be said for 1997's Tomorrow Never Dies.

Pierce Brosnan returns for his third Bonding, as do Judi Dench (as M) and gorgeous Samantha Bond (as Miss Moneypenny). Eighty-five-year-old Desmond Llewelyn, who has played Q since From Russia With Love (1963), the second film in the series, also shows up, though retirement is presumably imminent: We are introduced to his successor, the rather more clumsy R, played (in an inspired bit of casting) by none other than John Cleese.

As usual, we get a 10-plus-minute precredit action sequence, in which Bond retrieves a suitcase full of money from a Swiss banker. Things go awry -- big surprise -- and Bond goes chasing after a gorgeous assassin (Maria Grazia Cucinotta, of Il Postino fame). The chase is, well, OK, but it's a retread of bits of things we've seen before in the series (as well as of a stunt from Jackie Chan's Armour of God films).

Contrary to the usual pattern, this opening sequence actually sets up the rest of the plot. In returning the money, Bond screws up, and M's old friend, Sir Robert King, (David Calder) is killed. The guilt-ridden 007 wants to chase down the villain who has set him up as an unwitting accomplice. The dastard turns out to be Renard (a barely recognizable Robert Carlyle), an international terrorist who had previously kidnapped King's gorgeous daughter, Elektra (Sophie Marceau).

We first see Elektra at her father's funeral. M, convinced that Elektra is still in danger from Renard, assigns Bond to protect her. Spunky Elektra is not easy to guard, however. She insists on carrying on her father's work, completing the Azerbaijani leg of an oil pipeline that will serve the West. It quickly becomes apparent that someone in her immediate retinue is on Renard's payroll. While searching for the turncoat, Bond meets gorgeous nuclear physicist Christmas Jones (Denise Richards).

Did we mention Bond's earlier encounter with gorgeous physician Molly Warmflash (Serena Scott Thomas)? Do we sense a pattern? (As usual for a Bond film, all the normal-looking women under 40 seem to have been wiped out by an unnamed plague.)

Bond films live and die by three things -- casting, gadgets, and action shtick. The casting here is mostly first-rate: Brosnan remains the best Bond since Sean Connery. The Bond team has always understood the importance of an interesting villain. Carlyle's Renard may at first seem unrelentingly evil, but he eventually shows a tragic side that is sympathetic and even touching. Marceau does her best in an unbelievable part, Dench gets to be the most active M to date, and, for comic relief, Robbie Coltrane shows up as a friendly profiteer of ever-shifting moral character.

Denise Richards is, by all conventional standards, almost perfectly beautiful, but her beauty is so vacant that it's hard to take the idea of her playing a nuclear physicist as anything but a conscious joke on the part of the producers. And, as in Starship Troopers, her performance suggests that the vacancy is not merely skin deep.

The gadgets are nothing special, except perhaps for a giant flying hedge-clipper. A giant protective balloon suit is poorly used.

The action shtick: This Bond is overplotted and underexplained. For example, the mechanisms leading to Sir Robert's death are utterly baffling as they happen, which undercuts the suspense; and the eventual explanation is simply anticlimactic gibberish.

It may seem finicky to ask for believability in this sort of movie, but suspense -- rather than sheer bombast -- is dependent on careful exposition: Payoffs require setups and vice versa. The model for this remains Goldfinger: Whatever its flaws -- and it has some lulus -- it's a textbook model for how to structure action of this kind. The writers and directors of every Bond film should be forced to watch it before their first story conference.