Sympathy for the Devils

No one's fighting for you in the three-way battle over televised football. 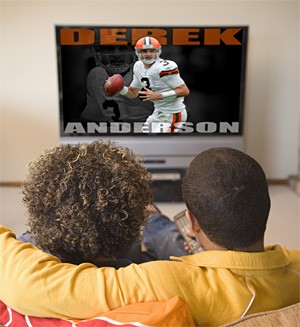 Yet in this battle over public opinion, there was little doubt where the legions would cast their sympathies. On one side was the NFL Network, purveyor of the true national pastime, offering weight-room anomalies smashing into each other for our viewing pleasure. On the other side [cue the Wagner] was Big Cable, including Northeast Ohio powerhouse Time Warner, which refuses to carry said network. It was like Captain America picking a fight with your landlord.

For the last 17 billion years, cable has embraced a theology of low service, high cost. It is the time-tested thesis of monopolies everywhere, be they FirstEnergy, the vendors at The Q, or the Cuyahoga County Democratic Party. You don't like it? Perhaps you should try one of our competitors. Ha, ha, ha.

You imagined Time Warner chieftains scurrying around with thin mustaches and black capes, hustling to get a good seat for the executive training session, where a former Treblinka guard will offer instruction on chortling ominously.

But in this fight over televised football, which also includes the Big Ten Network, there really aren't any good guys. There are just three combatants with a history of getting into your pocket — all with designs for someday taking your pants as well.

Distilled to the core, it's simply a joust over who gets to play middleman. For years, the NFL and Big Ten received generous checks for allowing their wares to air on someone else's network, which in turn received even bigger checks from advertisers.

Yet at some point a wise sporting exec thought to himself, "Hmm, maybe we should glom onto all that money by starting our own networks." And so they did.

Baseball was the first. It had the natural advantage of 162 days of built-in programming. Better yet, it only had to strong-arm local cable to carry its new channel (see SportsTime Ohio). Even the caped villains of cable could not withstand the fury over a season-long Tribe blackout.

But football was another matter. The NFL had programming for just two days a week, while most of the year would be filled with documentaries on the Arizona Cardinals' historic 2003 season. It would have to convince cable operators nationwide that their customers really, really wanted to see the heroic exploits of Josh McCown in April.

The Big Ten could add basketball, but due to inept athletic departments and cowardly scheduling, much of it has only provincial appeal. When Minnesota and Northwestern squared off earlier this year, fans in Chicago and Minneapolis had to be held at gunpoint to tune in. And outside Ohio, those with the jones for televised competition would be better served watching reruns of the Grenada War than that epic Ohio State-Akron matchup.

So both leagues, quite naturally, invoked disingenuous marketing to make their case. The NFL is charging 30 cents a month per subscriber. The Big Ten, a whopping 90 cents. Yet they somehow believe that Time Warner, in defiance of capitalist law, should absorb these costs and run their channels on basic cable. It's a proposal equivalent to "You should pay me a dollar to fetch me another beer."

Time Warner has responded by offering to put the networks on its expanded sports tier. The leagues say no, since that foils their ultimate goal of reaching every American household — at which point they can bring all games in-house, and watching the Browns-Raiders will cost as much as a Lincoln payment.

Of course, only the foolish would see cable innocent in all this. As NFL Network spokesman Seth Palansky says, "It's hard to undo your business practices that have been so successful for decades." And when those practices consist of behaving like Satan's bumbling stepbrother, it's especially difficult.

Over the past decade, cable rates have nearly doubled. Programming, needless to say, has not. But while nearly everyone can watch Heidi Klum shill jewelry on QVC, only a fraction will see that Colts-Falcons game on Thanksgiving Day. That's because shopping channels pay to be carried on cable, though their entire audience consists of one Elyria woman with $98,000 in MasterCard debt. "They're making decisions based on their business interests, not their customers' interests," says Palansky, who believes the matter will eventually be decided by government. "I didn't hear any consumer say, 'I need 11 shopping channels.'"

The Willowick City Council is already onboard, urging Time Warner to carry the NFL Network. Legislators from Texas to Wisconsin have done much the same.

Meanwhile, Michigan Congressman John Dingell sent a letter to the Big Ten, wondering why it's in the public interest for fans to now pay for games that were "previously free." And as Palansky notes, the cable industry has "lobbyists upon lobbyists to protect their business interests." In Washington, money doesn't just buy love. It'll buy you three congressmen from Arkansas to fetch your dry cleaning and pick up the kids from school.

So fans are left to hold their noses and pick a side to root for:

The Big Ten, Making Untold Fortunes off the Backs of Unpaid Labor?

"You can understand cable trying to do and say anything to hold onto their monopolistic enterprise," says Palansky.

"For me, it's hard for me to understand why a cable operator in the state of Ohio wouldn't carry the Buckeye network," says Elizabeth Conlisk, spokeswoman for the Big Ten Network.

"What we're trying to do is protect our customers," says Travis Reynolds, spokesman for Time Warner.

Then they all had a cigarette and chortled ominously.