Rock's out, downtempo's in at West Side club. 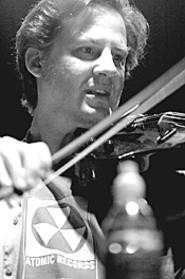 The Symposium has temporarily closed and will reopen Friday, November 12, as the Remix Lounge (11794 Detroit Avenue, Lakewood), eliminating an intimate rock club and replacing it with a designated chill zone that has a full bar, serves gourmet coffee, and stays open late.

"I'm very much into downtempo and trip-hop, but I've found a surprising lack of options for places to hear it," says Remix mastermind Ted "DJ Cable" Carter, who was the creative force behind the neighboring Chamber goth club. "I have always dug the cool '40s and '50s vibe. I envision the Remix Lounge to be a place where Barbarella would go to hang out with Buck Rogers, Dean Martin would have a martini with James Bond next to a Tiki statue, and Humphrey Bogart would have a cup of joe next to Moby."

The Remix Lounge is part of the Phantasy complex, a block that contains the Phantasy Nite Club, Phantasy Theater, and Chamber. The De Frasia family has owned the building through its various incarnations since 1965. Open Wednesday through Saturday, the Remix Lounge will be the West End's only after-hours spot, staying open until four a.m. Fridays and Saturdays.

Overstuffed couches will now occupy the small stage that was a platform for new and small bands. As many as four local groups played the Symposium on weekend nights, without the pressure to sell a set amount of tickets. Tapping the lounge trend will eliminate one of the city's reliable outlets for beginning acts, but owner Michelle De Frasia says that bands will still have a chance to play in the area. Shows at the upstairs Phantasy Nite Club could grow, in keeping with the city's trend toward larger bills.

"It's just getting harder and harder to get big-enough crowds," says De Frasia. "I'd like to get the bands in one spot. They'll have better shows and a bigger audience. I think I can put together better packages this way."

· Following the cancellation of Loveline, 92.3 Xtreme Radio's The Metal Show will now run Sundays from 10 p.m. to midnight.

· Two years after its final show, raw rockers Southern Trespass will reunite at the Hi-Fi Club (11729 Detroit Avenue, Lakewood) November 5. A force on the scene in 2001 and 2002, the band fragmented, and members went on to form Amps II Eleven and the Kill City Kills.

· Most of the Subtones will play two sets at the November 6 Misfits show at Peabody's (2083 East 21st Street). The Subtones will play some original punk, then reconfigure as the Rattlers, a hard-edged garage-punk group in the tradition of Joan Jett and the Ramones. Rhythm guitarist Holly Berry will front the band, backed by Subtones frontman C.J. Gunn and drummer Todd Mey. Gunn's plan to form a Misfits tribute band with Misfits vocalist Michale Graves has been scrapped, following Graves's enrollment in the Marine infantry reserve.

· The lone 'Slinger rides again: the Jack Fords, a band that features former Cowslingers guitarist Bobby Latina, will make its live debut Friday, November 5 at the Grog Shop. "We're a cross between the Faces and Stones, with a roots-rock, bluesy swagger to it," says Latina.