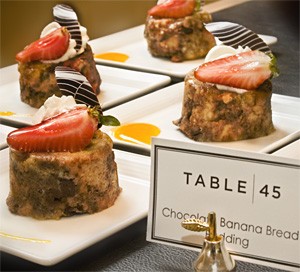 As a lifetime member of the "quality over quantity" clan, I don't get terrifically worked up over Sunday brunch buffets. But I do dig Table 45, executive chef Zack Bruell's high-concept dining room in the InterContinental Hotel, on the Cleveland Clinic campus. Svelte, sophisticated, and starring a smartly executed menu of global cuisine, the restaurant generally sits near the top of my "Cleveland's best" list.

So, on a recent Sunday afternoon, with three companions in tow, off I trudged to Cleveland's East Side, aiming to discover what a top-tier restaurant might do to civilize the usual Sunday-buffet feeding frenzy.

The magic begins at the doorway, with a spare, serene, and airy decor that makes Table 45 a prime refuge for one seeking to extend the weekend and delay Monday's eventual arrival. No free-range kiddies here either, disturbing our peace by beating a trail to the soft-serve machine. Instead, munchkins — and there are munchkins in attendance — can content themselves with such childish fare as packaged breakfast cereals, midsize muffins, and tiny yogurt parfaits.

Free valet parking and a soundtrack of global background music — a refreshing change from the usual hotel-lobby Muzak — make meritorious touches too. But by far the smartest innovation is the elimination of steam tables, those accursed contraptions that eventually turn even the finest food into an ugly, soggy mass. In their place, the restaurant modifies the "all-you-can-eat" concept, augmenting its 20-item buffet table with a menu of freshly prepared mains.

On our recent visit, that meant kicking off our meal by grazing on fresh fruit, salads, sushi, and raw-bar items that included impeccable ceviche, giant oysters on the half shell, and pristine jumbo shrimp. Made-to-order waffles wafted marvy aromas; freshly filled omelets looked sunny and plump. The only exceptions to the steam-free rule were sausage links and applewood-smoked bacon, but they stood up to the challenge.

Reinforcing the global-cuisine concept were fruit-studded couscous, a small collection of tasty dim-sum dumplings and buns, and bits of naan (not quite fresh from the tandoor, but close enough), along with a trio of savory spreads.

And that was just Round One. Next we selected our entrées — choosing from eight made-to-order dishes that included cream-cheese-stuffed French toast, eggs Benedict, multigrain pancakes, seared crab cakes on brioche, and grilled salmon and rice. (For a $7 up-charge, we could have opted for a grilled New York strip steak with fries.)

After the mains, it was back to the buffet table for a selection of petite, beautifully plated desserts, including crème brûlée, lemon-custard tarts, chocolate mousse, brownies, cookies, and — our fave — moist almond pound cake, topped with a teensy pouf of whipped cream and some toasty almond bits.

Coffee, juice, and soft drinks were included in the cost. Cappuccino, espresso, and lattes cost extra. And an additional six bucks secured us a ginormous Bloody Mary, garnished with green olives and heavy on the pepper sauce, even though the booze component was more a hint than a highlight.

So far, so good — in theory, at least. In practice, though, the outing hit some rough patches.

First off, the buffet table lacked small condiment bowls, necessary for keeping the soy sauce out of our Caesar salads and the cocktail sauce away from our dim sum. Staffers cheerfully provided a stack when we asked, but the dishes should have been on the line, at the ready. Also, while the table was kept plentifully stocked, it could have been more closely monitored. Signs identifying various dishes had been shoved out of place; serving utensils were missing from some dishes; and the sushi had been placed far distant from its requisite soy sauce, wasabi, and pickled ginger.

More telling, though — and ironic, considering the fresh-from-the-kitchen concept — was the fact that three of our four entrées arrived at the table barely lukewarm. That included those otherwise-excellent lump crab cakes, topped with brie and a bit of spicy aïoli, and the vibrant eggs Benedict, topped with spicy chorizo and a cheese-piqued béchamel. The grilled salmon was also lukewarm and slightly on the dry side. Only the mahi-mahi, in a subtle yellow-curry and coconut broth, and served with lentils, made it to the table hot.

The chill continued from there: The after-brunch coffee was barely tepid. And while our seemingly well-seasoned server agreed to fetch us some hotter java, it took a good 10 minutes for him to do so. A 15-minute wait for our tab further tested our patience — and there's no worse day for patience-testing than Sunday.

Obviously, Sunday brunch fans could do far worse. Even with all those missteps — and if only for its elimination of steam tables — Table 45 deserves a spot in the Sunday Brunch Buffet Hall of Fame. But considering both the restaurant's prices and reputation, staffers could finesse the finer points just a little more.