Authentic, fresh, and flavorful: Three reasons to say the magic words "Take me to the Kasba." 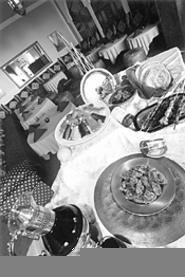 All due apologies to the Clash, but it's Crosby, Stills & Nash who are responsible for my obsession with Morocco. If I climbed aboard the "Marrakesh Express" once, I swear I did it a thousand times during the long, hazy nights of my misspent youth; and today, all I have to show for it is a passion for minarets, Moorish architecture, and mint tea, served up hot and sweet.

Of course, we adventurous types long ago accepted the notion that exotic North African culture is always going to be in short supply on the decidedly familiar North Coast. It's a good thing, then, that we've got the Kasba, an authentic Moroccan outpost in Cleveland Heights, where every meal is a tantalizing adventure.

The six-year-old restaurant (which originally opened under the name Casablanca Cuisine) has been a labor of love for chef-owner Wahed Haydouni and his wife, Carmen. A native of Casablanca, Haydouni learned his cooking skills while still in his teens, and he relies on traditional Moroccan recipes and techniques to create classic dishes such as couscous, bastilla, harira, and half a dozen types of savory, stewlike tagines, brought to the table in handsome clay cooking vessels.

As did his forebears, Haydouni makes nearly everything from scratch, with fresh ingredients purchased at local markets. His pantry is stocked with saffron, semolina, and cinnamon, and a generous supply of olives, almonds, and chickpeas is always on hand. Among meats, Haydouni works mostly with lamb and chicken, although less traditional beef shows up in several dishes, including a strip steak -- perhaps as a concession to more Westernized palates. The chef rounds out his small but enticing menu with a handful of fish and seafood items, such as paella, seafood pasta, and pan-fried calamari, and several meatless dishes such as zaalooka (a cold eggplant dip, similar to baba ghanoush) and vegetarian couscous.

The preparation of couscous, in fact, in all its various guises, is one of Haydouni's fortes. When he's done with them, the coarse, saffron-scented grains of steamed semolina are starchless and nearly weightless, but have maintained the nuttiness that makes them the perfect substrate for such stewed toppers as succulent lamb, in its dark, rich juices, or chickpeas and tender-crisp carrots and zucchini. Indeed, a veritable mountain of lush, lamb-topped couscous disappeared from my plate during one evening's visit: I maintain that it simply floated away, although others at my table insist they saw me scarf down every single bite. And don't hesitate to request a saucer of harissa on the side; the fiery condiment of chiles and garlic traditionally accompanies couscous, but seems to add dimension to nearly everything it touches.

Haydouni's other culinary tour de force is his bastilla, a mother-and-child reunion of buttery shredded chicken and gently scrambled eggs, accented with parsley and almonds, baked in a frangible phyllo crust, and served with an ample sprinkling of powdered sugar and cinnamon. Astonishingly fragrant and full of delicious dichotomies -- sweet versus savory, crisp against moist -- it's easy to see why this unique dish plays a pivotal role in traditional Moroccan celebrations. But more simply, it's just plain fun to eat: "Like having dessert for dinner!" as one delighted companion put it.

It was a challenge to choose among the menu's six different tagines (the word refers to both the stew and the chimney-shaped clay pot in which it is prepared), but we finally narrowed it down to a representative sampling of three. The most delicately flavored of the lot was the fish tagine, this night made with a moist filet of fresh salmon and baked with carrots, green peppers, and potatoes in a light tomato-and-cumin sauce. On the other hand, the "classic" tagine, more of that meltingly tender lamb -- here simmered in an unctuously rounded saffron sauce and piqued with loads of sharp, salty kalamata olives -- was a bold and sassy little number. Only the Casablanca Chicken Tagine, a dryish, mostly boneless chicken breast and wedges of unevenly cooked potato, simmered in a too-subtle lemon sauce and finished with chopped cilantro and one or two lonely olives, failed to light our fire; next time, we'll set our caps for the Fez Chicken Tagine, with raisins, onions, and toasted almonds, and see whether we fare any better.

All entrées (modestly priced at $12 to $17) are preceded by a bowl of thick, dark harira, a traditional Moroccan bean-and-lentil soup, garnished with a few strands of vermicelli and seasoned with fistfuls of fresh cilantro. At first sip, the soup tasted bland and understated; but by the fourth or fifth spoonful (and yes, with the addition of a little salt), its nuances became apparent -- and appreciated. A simple tossed salad of lettuce, tomato, onion, red pepper, and chickpeas followed, lightly dressed in vinegar and oil.

But why stop at three courses, we asked ourselves during a second visit, when the seductive seven-course Sultan's Feast was whispering in our ears? Predictably, we gave in to temptation, especially after discovering that the banquet provided an opportunity to enjoy modest portions of all our favorites -- tagines, couscous, bastilla, harira, and salad included -- as well as marinated, grilled brochettes of lamb or chicken (very much like kebabs), and a sweet conclusion of Moroccan cookies (each one a variation on the lyrical theme of honey, sesame seeds, and almonds) and the mandatory, fragrant mint tea, served in tiny, gold-embellished glasses. (Although a wine list wasn't offered, our server informed us that a small selection of Moroccan wines is available from the bar, as well as the usual collection of beer and spirits.) Not only was the feast a tabletop adventure of the first order, but at an all-inclusive $26 per person, the price couldn't have been more fair. A smaller, five-course Petite Feast, set at $20, is also available, for diners with smaller appetites or a larger degree of self-control.

When it first opened, the Kasba's decor was mostly pedestrian and unremarkable. (The restaurant's name, incidentally, refers to the traditional palace-fortresses around which small pre-colonial North African towns were built.) But the Haydounis changed all that last year, when they closed briefly for redecorating. Now, the interior is nearly as captivating as the food, with white stucco walls punctuated by Moorish arches, ornate mirrors, and a brilliantly colored mural of the Moroccan countryside, complete with palm trees, mountains, and an achingly blue sky. A sinuous soundtrack of Egyptian, Algerian, and Andalusian music weaves its way around the room, and after dusk, red-lamped lanterns paint the ceiling with intricately patterned shadows. Dining tables are low and circular, topped with golden cloths and garnished with blue or red cotton napkins; plump, tooled-leather ottomans and stacks of gold-and-crimson pillows piled onto long banquettes provide the seating. Factor in the occasional presence of a belly dancer, and if it weren't for the big, bare windows overlooking Taylor Road (wouldn't some gauzy curtains be a nice touch?), I nearly could have imagined that I had finally made it to Marrakesh, after all these years.

There is, in fact, only one troubling thing about our visits to Kasba: On both a Thursday and a Saturday evening, the place was nearly empty. Carmen Haydouni (a West Sider whose own heritage is Italian American) says business was considerably more brisk before the war with Iraq; since then, the crowds have pretty much evaporated. She's reluctant to place the blame on anti-Arabic sentiments, preferring to believe that the Fox News effect and the generally sluggish economy are conspiring to keep guests at home. "Plus," she says, "we've kept a low profile over the years, and maybe not enough people know about us."

But now you do. And even if your visit to the Kasba doesn't lead directly to world peace and brotherhood, at least you can count on getting a helluva good meal.