Veteran Singer-guitarist Sounds As Confident As Ever On Maestro 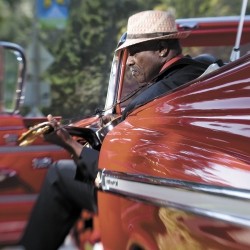 For some, it may be hard to believe that Taj Mahal's new album, Maestro, celebrates the blues legend's 40th year of recording. For me, it's hard to believe that it's been only 40 years. My initial exposures to Taj Mahal as a teen - first on a Columbia compilation called Superock, then on late night FM/college radio - led me to believe that I was listening to a bluesman of vintage quality, a grizzled old vet who recorded in hotel rooms in front of a single mic and sold his shellac 78s out of the back of a Model T. I would never have imagined that the authentic old bluesman that roared out of the speakers in the '70s was barely in his mid-20s when he made those recordings.

"By the time I recorded in '67 and '68, I had been playing since the late '40s, learning and playing," says Mahal via phone, in his distinctively gruff yet warm voice. "It was in the late '50s that I started playing out - outside of church and home and family - but the music I started with was the music I started playing, and I learned it legitimately from folks that were from the South, like my mother. The other side of the family's from the Caribbean so there's those influences. If your dad's a blacksmith and you hang out with him, with the iron and the anvil and the big hammers and the horses, you might be a blacksmith too."

Mahal's natural authenticity is a test-ament to how deeply engrained the music is in his DNA. Born in Harlem in 1942 and raised in Springfield, Massachusetts, he grew up in a richly diverse musical culture, thanks to his parents: His father was a Caribbean jazz pianist/composer; his mother was a schoolteacher/gospel singer from South Carolina. Mahal learned classical piano, clarinet, trombone and harmonica early on, and his singing skills were natural.

He discovered his stepfather's guitar as a teenager, and a new neighbor, versed in the blues, showed him the differences between Delta and Chicago styles and introduced him to the masters of each.

As an agriculture major at Amherst, Mahal formed the Elektras, a popular campus party band, and after graduation he motored west ,where he assembled the Rising Sons, the launching pad for a young Ry Cooder. After opening for huge acts like the Temptations and Otis Redding - and hanging out with blues icons Howlin' Wolf, Lightnin' Hopkins and Buddy Guy - Mahal began his solo career with a trio of acclaimed albums (1967's Taj Mahal, 1968's The Natch'l Blues, 1969's Giant Step).

Over the past 40 years, Mahal has adapted his unique blues style to everything from atmospheric movie soundtracks to children's albums (earning two Grammys on nine nominations along the way), and in his own music, he has embraced reggae, Hawaiian tradition, African roots, jazz and world beats with equal gusto. It's no wonder Mahal chose to call his new album Maestro. The title was bestowed upon him years ago in South America. He humbly accepted the honor.

"It started in Argentina 15 to 20 years ago," he says. "I was down there with Albert King and then with Albert Collins, and every time I was there, they kept saying, 'Maestro, maestro,' and I said, 'Wow, they're actually calling me the Maestro. How about that?' And I hang out at this place called Subway Guitars, and those guys started calling me the maestro, and it kind of stuck. So I said, 'There's a good name for an album.'"

In fact, Mahal had been giving a lot of thought to how he would approach a 40th anniversary album. The typical boilerplate for this type of recording is to put together a guest list of commercially viable younger artists with the venerable older artist and try to draw sales from the newer demographic. While he was behind the guest concept, Mahal was not the least bit interested if the guests compromised his integrity.

"I didn't want an album that sounded like everybody else's," he says. "If the record company or management had their hand in it, it came off smarmy. I've heard the hype and I haven't bought any of those albums." When Mahal's management broached the idea of commemorating his recording anniversary with an album laden with special guests, he eventually accepted, with a strongly worded proviso.

"Here's the things I had to say," he says firmly. "I have to be totally in control of this thing. Record company or anybody else that was involved could make all the suggestions they want, but the final thing is whether I like it, I want it and I want to do it. I made up a laundry list of different people and songs and ideas, and sifted through that with conversations over luncheons and dinners and meetings. I wanted it to feel the way I do things: natural and good and connected to the roots. Let's bring rhythm and joy and have a great story to tell. I think I was able to achieve that with this record."

"Everybody on this record is connected to me personally," he says. "Nobody comes in from out there that I don't know and have a personal relationship with, and I think it shows in how the record sounds."

With all of the various guests, studios and styles threading through Maestro, the album still sounds like Mahal playing with a band, albeit an incredibly diverse and talented band. The cohesive unity of Maestro points directly to the power of Taj Mahal and the wisdom of his song choices for the album.

"We talked about how to highlight the different bands," he says. "The Innocent Criminals come off really great with Ben, Los Lobos plays an incredible blues band and flips over to a romantic reggae band, and the Phantom Blues Band kick butt in every direction they play in. Same with the Taj Mahal Trio, on 'Zanzibar,' which is deep African, and then they go all the way to the other end and play deep in the blues. We were able to bring a lot of great music and send people out on journeys to hear where there's more music like this. This stuff wasn't made in a vacuum. I think Ali Farka Toure said it best: 'The leaves and the branches of the music are in the United States, but the trunk and the roots are in Africa.'"

As special as Maestro sounds from this side of the speakers, Mahal's pleasure in the album is essentially the same joy he took from his earliest work.

"All albums feel like that, so I think this is just going out and doing more," he says. "I'm more sure of what I'm doing. I've been doing it for this long. I know what I want and I got it. There's no sound on those songs that wasn't in my head."