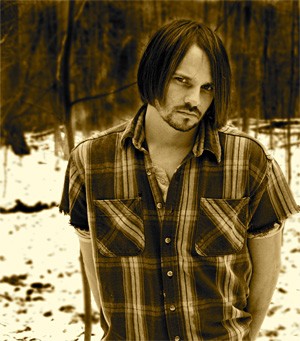 Pounding Nails in the Floor With My Forehead is a 100-minute, one-actor rant in two acts and ten scenes. It features the scathing, often acidly funny writing of playwright Eric Bogosian. The playwright's 1987 Pulitzer-nominated play, Talk Radio, was made into a movie by Oliver Stone, if that tells you anything about how Bogosian's mind works.

But not all of his writing made the cut in this Bang and Clatter play, and his material is treated with an energetic but monotone performance. As a result, his potentially sizzling material just fizzles.

First, though, the good news: Bogosian is a skilled and whip-smart commentator on the social vagaries of urban and suburban America, and his visceral rage is palpable in virtually every sentence he writes. In one vignette here, a wild-eyed guy is fantasizing about taking a pig, doggy-style. "While the pig is squealing with joy, I'm gonna be smoking crack in a giant crack pipe, while Dame Judi Dench stands behind me in a leather bondage outfit with a strap-on dildo, fucks me in the ass while she bangs me over the head with a giant wooden mallet. It will be a lot more interesting than driving my Honda Accord in the 55-mile-per-hour zone."

This is the sort of rant — expressing the hyperaggressive frustrations of several different men — that makes the show. Or is it just one man? In this production, director Sean McConaha and performer Sean Derry, the co-founders of B&C, have decided to focus largely on Bogosian's most obviously unhinged males.

This plays to Derry's strengths of portraying scummy, barely functional human detritus. But it creates a more one-note experience than was intended by the playwright. The Seans have eliminated some of the funniest scenes from Bogosian's original work.

The missing pieces include a struggling actor who encounters a successful performer on the street; a suburban barbecue king, happy in his chain-link-fenced estate; and a placidly scary doctor in consultation with a patient. Left in, they would have served as dramatic ballast for the over-the-top misfits who wallow in their scatological and come-soaked reveries of misery.

Derry, a talented actor with an apparent preference for returning to familiar character types, makes only passing attempts to craft different people in each scene. The show begins with a bit, done in silhouette, of a talk-radio host rhapsodizing about the good ol' days and railing against the profusion of commies and lefties today. But without at least a passing impersonation of Rush Limbaugh, Glenn Beck, or Bill O'Reilly — and with repeated references to Hillary Clinton as "he" — the whole sequence just seems weird.

Similarly, there is a potentially hilarious vignette about an "Inner Baby" self-development group led by an unctuous fellow (it could be someone like Al Franken's Stuart Smalley). But here, Derry and McConaha don't fashion a new character, settling instead for a slightly less manic version of Derry's stock psycho, who appears in the previous scene. As a result, there is not enough contrast between the scenes, deflating the more gentle humor in the second bit.

And when Derry is called upon to play a pussy-whipped dude in a "Recovering Male" group, he never makes himself vulnerable enough to lend humor to lines like "I just completed a course at the new school: 'Your Self, Your Shame, Your Orgasm.'" Even though the feminist-jabbing humor here is dated, it could amuse, if the actor bothered to inhabit this particular character.

Derry does have his moments. Working in front of sheet-metal panels that have been wrinkled, hammered, and drilled, he clearly channels Bogosian's angst and generates plenty of laughter and nervous tittering. His diatribe on the mind-ripping highs of indulging in jungle sex while stoned is truly effective, especially when he contrasts it to the upper-class pleasures of skiing.

Clad in predictable down-and-outer garb — dark T-shirt, ripped camouflage pants, and a razor on a cord around his neck — the barefooted and greasy-haired Derry looks like a stereotypical slug. This makes it much too easy for the audience to dismiss him and his rants.

Derry is too accomplished an actor and McConaha far too gifted a director to settle for such easy choices.