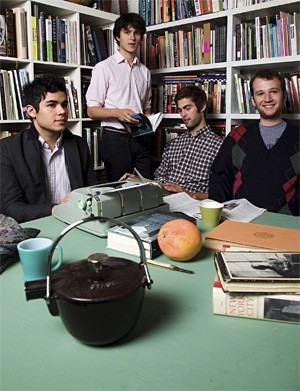 Hard to believe that 2008 is already four months old. It seems that only yesterday we were counting the days till our New Year's Day hangover would subside. As we take stock of some of the past three months' hits (Jack Johnson catches his biggest wave), misses (maybe it's time for another wardrobe malfunction, Janet?), and annoyances (please, Flo Rida, just go away), here's a look at some of 2008's most buzzed-about albums — so far.

What's the Buzz? The second covers album by Cat Power (friends call her Chan) is a choice follow-up to 2006's The Greatest, in which the pasty indie-rocker found her groove with a bunch of Memphis soul men.

Believe the Hype? Cat Power drastically reworks songs by other artists here. You might know Bob Dylan's "I Believe in You." You may be familiar with Hank Williams' "Ramblin' Man." And you most definitely know "New York, New York." But Chan Marshall goes mostly for obscurity here, so who knows whether "Aretha, Sing One for Me" is faithful to the original?

Chance It'll Make It on Year-End Top-10 Lists: 52 percent. Hipsters love this kitty, but they love her even more when she's singing her own songs.

What's the Buzz? St. Elsewhere, from 2006, was a mind- and speaker-blowing freakout by a pair of costume-wearing weirdos. The Odd Couple is even more freaked out.

Believe the Hype? Cee-Lo Green's nasally voice — part sing-songy, part rap, totally out-there — gives Gnarls its distinct flavor. But it's Danger Mouse's house of samples and old-school R&B beats that fuel the album, which wraps paranoia, self-loathing, and some super-funky songs about psychological hang-ups into one bouncy ball of confusion.

Chances It'll Make It on Year-End Top-10 Lists: 65 percent. Without a "Crazy" anchoring it, will anyone remember The Odd Couple in December?

Made in the Dark

What's the Buzz? These British smartasses have now made three albums of ironic dance-pop that bank on the hope that their audience is just as tragically hip as they are.

Believe the Hype? Hot Chip's best and most popular song is called "Over and Over," and true to its title, it rides the same groove and lyric for more than five minutes. Made in the Dark stretches the formula a bit, mixing in some gooey ballads and retro sounds along with the usual party-starters.

Chances It'll Make It on Year-End Top-10 Lists: 55 percent. "Shake a Fist" is one of the year's most frenetic singles. But the group's winking irony wears thin over 50 minutes. Gonna be hard to sustain that momentum for another eight months.

What's the Buzz? Swedish metal band takes all the fun out of music and piles on time signatures that are so complex, you need a calculator and someone with a degree in theoretical physics to help you figure it all out.

Believe the Hype? Meshuggah way impresses with its skills — especially drummer Tomas Haake, who sounds like he's about three and a half different guys. But it's all so cold and clinical. Like a degree in theoretical physics.

Chances It'll Make It on Year-End Top-10 Lists: 5 percent. It's hard to believe that anyone listens to obZen for pleasure. Sure, it's technically impressive, but so is the Akashi-Kaikyo Bridge in Japan, and you don't see anyone strolling across that just for the hell of it. Besides, music critics hate metal. A guitar-playing theoretical physicist has a better chance of making the Top 10.

Believe the Hype? With their extra-thick accents and '80s-style synth-pop riffs, the Teenagers still sound like they're in it for laughs . . . and for the girls, of course. But there are some genuinely hooky songs on Reality Check.

Chances It'll Make It on Year-End Top-10 Lists: 35 percent. Those New Order rip-offs are only as durable as their hooks, and the mopey Mancunians did them way better in "Temptation," "True Faith," and, well, just about everything in their catalog.

What's the Buzz? Cardigan-wearing Columbia University grads blew up the blogosphere months before their debut album came out. By that time, most hard-core hipsters had grown tired of them.

Believe the Hype? Mixing jaunty Afropop, smarty-pants indie-pop, and references to such Wikipedia-conferring subjects as mansard roofs, Oxford commas, and the Khyber Pass, Vampire Weekend can be pretentious as hell. As if you couldn't figure that out by the preceding sentence.

Chances It'll Make It on Year-End Top-10 Lists: 85 percent. Vampire Weekend is the buzz band to beat in 2008. The guys were a hit at South by Southwest and actually made a pretty good album. There's no way their second one's gonna be even half as good.