Tales From the Crypts 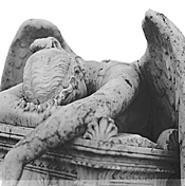 If you find yourself crossing the bridge into Kirtland's deep, dark forest, be sure to bring along a bag of candy and a pocketful of money. Otherwise, the gang of teenage ghosts called the Melonheads will kidnap you and make you one of their own.

This East Side travel tip comes courtesy of Myths, Legends, and Graveyards, a narrated bus tour of Lake County's historic cemeteries. The Melonhead myth dates to the 1950s, when stories were dredged up about a Cleveland Clinic physician who abducted encephalitic children from the hospital, took them home to Kirtland, and conducted scientific experiments on them. When the doctor's wife died, the legend goes, the children killed the physician. "They ran into the hills and forests, and the older ones took over and hid the younger ones," says Kathy Purmal, director of the Lake County Historical Society, in a spooky whisper. "Today, if you venture into Melonhead territory, you must cross this bridge and leave a token or money, so you can get back."

Another of Purmal's favorite tales features the Monster of Little Mountain: Since the 1830s, folks have heard hideous howls and cries from a Bigfoot-like creature that roams the woods of Painesville. "Summer evenings were shattered by these bloodcurdling screams, and it went on for weeks," Purmal says quietly. "Women were not allowed to walk a half-mile down the road, for fear it would jump out and stalk them."

Not that these graveyard tours wouldn't scare the dickens out of the fainthearted. Armed with actors, two buses take off on loops of three cemeteries each in Painesville and Kirtland. Along the way, a narrator recounts a parade of legendary tales. After the tour, a dinner of fried chicken and potato salad is served inside the historical society's rustic barn. "I can't tell you what happens," Purmal warns, still whispering. "But there's a strong possibility you'll encounter some ghosts."