Bang and Clatter gets chatty with its tale of a child murderer. 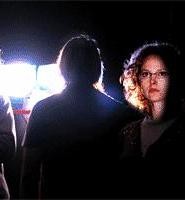 Pedophilia seems to be the psychosexual derangement of the day, what with the lurid IMs of La Cage Aux Foley and Dateline's enduring obsession with spying on sweaty old guys trying to hook up with middle-schoolers.

Disgusting as it all is, the stakes go even higher when the offense involves pedophilia and murder of a 10-year-old. That's the crime of serial cretin Ralph in Frozen, a play by Bryony Lavery now being performed by the Bang and the Clatter Theatre in Akron.

While not exactly a walk in a pansy field, this almost three-hour dissection of three people linked by unspeakable misery has moments of humor and some interesting takes on the nature of evil. But a tendency for excessive explication and one off-note performance turn what could have been a powerful drama into what occasionally feels like an imaginatively staged dissertation.

Wielding a fine-tipped brush, the playwright paints a devastating portrait of Nancy, a mother crushed by the loss of her young daughter Rhona. The girl had been on her way to her grandmother's house in London when she was whisked up by Ralph, a limping sack of unresolved agonies. Rhona was never seen alive again.

We encounter Nancy and Ralph in a series of monologues at the beginning of the evening, interspersed with the thoughts of a psychiatrist who is interviewing the incarcerated Ralph for her scholarly paper on serial killing as a forgivable act. Set on starkly plain platforms in front of white walls, all the focus is on the actors as they negotiate this mine field of emotion.

Nancy is at once the most interesting and predictable of the characters. Possessed of a wonderfully dry sense of humor, she's heartbreaking as she leads us through the stages of her grief, shaking her head at the lovingly battered stuffed animal in Rhona's now empty bedroom. And when that is contrasted with a later scene at the mortuary, when Nancy mimes touching and holding the remains of her daughter, the sadness is palpable.

Kate Duffield, tall and angular, does a fine job with a character that could easily tip over into mawkish sentimentality. She keeps it afloat by not overdoing her British accent and handling Nancy's wit with off-handed grace. Nancy continually pokes fun at her other daughter, Ingrid, for that girl's devotion to mystical and spiritual beliefs. But in the end, it is a grown Ingrid that helps bring Nancy out of her emotionally frozen state.

But there is almost too much detail to Nancy's journey. The loss of a child in this horrific manner is immediately understandable by virtually all people, whether they have children or not. But the playwright insists on giving us multiple scenes sketching out Nancy's distress when a lesser amount would have done the job.

As Ralph, the splendid actor Sean Derry chooses to display a series of sociopathic tics and twitches, and these he masters to a fare-thee-well. This Ralph is indeed scary, and Derry can make even the scooting of a folding chair he's sitting in feel like a punch to the solar plexus. But this hooded-eye characterization doesn't reveal the sinister charm that Ralph must have exuded in order to lure various girls into his grasp. If we had seen that side of Ralph, he would have been even more frightening; there is, after all, nothing more terrifying than evil with a smiling face.

Among the three major roles (there's also a mute prison guard), the most challenging is the American psychiatrist Agnetha. Called upon to deliver disquisitions on the difference between speakable and unspeakable acts -- all while interacting with spooky Ralph and dealing with a tragedy in her own life -- the person who plays Agnetha must have skills aplenty. Unfortunately, a game Laurel Johnson never gets her bearings, playing isolated emotions rather than crafting a rounded character. As a result, many of her scenes ring false, and a couple are awkward and unintentionally smile-inducing.

Still, this daring show has the earmark of a Bang and Clatter production: It's involving, even when you'd rather just turn away. Faced with a script that is almost impossible to pace in a normal way (there's only one acceptable speed -- slow -- for scenes where a mother is lamenting the loss of a young daughter), director Sean McConaha manages to keep the energy focused and the audience's attention rapt.

It's unusual to have live musical accompaniment for such a drama, but an ever-groaning cello overdoes the dirge-like aural background. Even with these wrinkles, Frozen is another interesting piece from the workaholics -- five-week runs of eight shows a year -- at Bang and Clatter.