Who has the right to write about the lord of the Ring's fictional tongues? 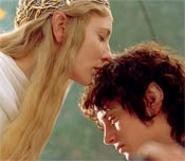 David Salo's colleagues and classmates at the University of Wisconsin-Madison have absolutely no idea how he spends his free time. It's not that the 32-year-old linguistics grad student is ashamed of his hobby (or obsession), which has occupied him for some 26 years. They simply cannot be bothered with it. "Most linguists feel that it's enough of a pain dealing with real-world languages to bother with invented ones," says the man whose life has been devoted, in large part, to the study and translation of the tongues "spoken" by elves and hobbits in the books of J.R.R. Tolkien.

Salo is a serious man, and so there is no attendant chuckle following his remark. As it turns out, the study of such imagined languages as Sindarin and Quenya--the latter so named by Tolkien in 1915, when he was a young Oxford University grad--is somber stuff plied by would-be academics tucked away in universities and, in one instance, the laboratories of the National Aeronautics and Space Administration. So wipe that smirk off your face. And stop rolling your eyes. There's absolutely nothing funny going on here.

Just ask Salo, likely to become the best known of the copious Tolkien linguists on the Internet who share information, trade gossip, publish journals and, most surprising of all to those of us who have enough difficulty mastering the English language, slam rivals in vitriolic e-mails and mailing-list posts. As it turns out, bubbling beneath the culture like Mount Doom's molten lava is a rivalry among Tolkien linguists--a very real battle being waged over a made-up language. There are those who would consider discussing the subject "scandal-mongering" about a "singularly unsuitable topic," in the words of one prominent member of the Elvish Linguistic Fellowship, which publishes journals devoted to these fictional tongues. But there are considerable rewards at stake--among them, a piece of the publishing pie, which likely will only grow over the next two years, as New Line Pictures releases three three-hour Lord of the Rings films, beginning this week.

Salo's reputation among such elvish-language students will be cemented soon enough. Three years ago, he was hired to help in the development of art, props, sets and backgrounds that called for the use of Tolkien's invented alphabets. Director Peter Jackson, filmmaker as fetishist, wanted everything written and spoken to make sense according to Tolkien's mandate, and Salo was called upon to ensure everything said and seen was lucid, if not completely precise. For his work, Salo is cited for "Tolkien Language Translation" high in the end credits of The Fellowship of the Ring.

"Peter Jackson is interested in making sure that nobody can point to something and say, 'Hey, that looks nice, but it doesn't mean anything,'" Salo says. "So he went to great pains to make sure that everything would be at least intelligible, if not perfectly accurate, since Tolkien is now dead and nobody really has the ability to reproduce his languages the way he did, and he was always changing them. We can only hope we get things approximately accurate. But it's better than nothing."

Salo, born in Indiana and raised on the East Coast, has been a fan of Tolkien's work since he read The Hobbit at age 6; he became fascinated with the detailed maps of Middle-earth and the author's ability to transform ancient languages into lingo of his own design. In time, Salo would study Latin and Old English and other dead tongues while a classics major at Macalester College in St. Paul, Minnesota, and in 1995 his hobby became his crusade. But he found little information about Quenya, Sindarin and other Tolkien tongues on the Web or in libraries. He began writing his own articles and posting to a Web site, Ardalambion, run by a Norwegian named Helge Kåre Fauskanger--who earlier this year became something of a controversial figure in the world of Tolkien researchers when he tried to publish two "lost" Quenya texts written by Tolkien himself. He was rebuffed by the author's son Christopher and the Tolkien Estate, which guards against all outside comers with determined vigilance.

Which is where Salo's problems arise: For several years, he's been working on a Sindarin dictionary, now nearly complete. But Salo says he cannot get the book published and blames his troubles on two parties: HarperCollins Publishers, which holds the worldwide rights to Tolkien's work, and the Elvish Linguistic Fellowship (E.L.F.), which publishes a journal called Vinyar Tengwar devoted to the study of the invented languages. The journal is edited and published by Carl F. Hostetter, a 36-year-old who works as a computer scientist at NASA's Goddard Space Flight Center in Maryland--and who, in recent years, has become Salo's nemesis.

For years, Hostetter and a handful of colleagues have been working with Tolkien's son Christopher--now 77 and the author of the 12-volume History of Middle-earth--to classify, transcribe and amend his father's linguistic papers, which Christopher sends to the group in small, photocopied batches every so often. "It is this work that I and my colleagues have principally been engaged in over this time," Hostetter explains, "and from which we have published various items, including two very early (c. 1915-17) and substantial lexicons of Tolkien's two chief invented languages, Quenya and Goldogrin." (Hostetter wouldn't grant an interview but did send two e-mails detailing his work and relationship with the estate.)

Salo insists Hostetter and E.L.F., with the Tolkien Estate's blessings, have been instrumental in quashing the publication of his book. "They don't like it when other people try to publish stuff about Tolkien's languages," he says, "because they think they're the only ones who ought to." Hostetter denies Salo's claims while acknowledging that theirs long has been a strained relationship. In November 1996, there even surfaced on the Internet long postings from both men detailing, in wildly varying accounts, Salo's visit in October of that year to Hostetter's Maryland home.

Hostetter says he's "earned [Salo's] animus solely by pointing out that since Tolkien's languages are the artistic product of an author whose works are protected by copyright, if one wants to publish work containing or mostly consisting of large amounts of material from these copyrighted works (as, for example, a substantial dictionary of Tolkien's invented languages), then one should ask the Tolkien Estate for permission to do so, if for no other reason than courtesy."

Which is absolutely correct, says Jane Johnson, London-based publishing director at HarperCollins Publishers and, until recently, the longtime editor in charge of the Tolkien catalog. For more than a decade, it was her job--indeed, a dream come true, she likes to say--to oversee and approve the repackaging and reissuing of the Lord of the Rings trilogy and The Hobbit and any other primary and secondary works, including illustrated editions and atlases of Middle-earth. Johnson says HarperCollins would "love to" publish a dictionary of elvish languages, such as the one Salo's trying to shop, but that it would require approval that, for now, is unlikely to come. Rarely do Tolkien's heirs allow for publications about the author or his books; one recent exception was Tolkien: Author of the Century, written by Professor Tom Shippey, Tolkien's successor at Oxford. (Ironically, J.R.R. Tolkien sold the film rights to the trilogy in 1969 for a few thousand bucks because of tax problems, and the estate has no say over the film or the licensing of tie-in products, such as Burger King goblets.)

"If an author uses any sort of quotation from the books themselves," Johnson says, "it would contravene copyright law in the U.S. or the moral rights law in Europe, which is quite widespread and covers a great deal more than the copyright law in the United States. It's about intellectual property, which covers a very, very wide area indeed. And people know the estate can be quite litigious, so it's always wiser to check things with them first rather than embarking on them on your own." No kidding: In 1997, the estate sued a clown in Brooklyn for using the name Gandalf the Wizard Clown, insisting that people might mistake the clown for the character in Lord of the Rings.

Besides, says Johnson--who became a college student of ancient languages, such as Anglo-Saxon and Old Icelandic, after getting hooked on Tolkien when she was 12--there's really little need for new books when the old ones sell just fine. Sales are up significantly, she explains, nearly 700 percent from this time last year. "I think we've just touched the tip of the iceberg at the moment," she says. "There are a lot of people who've never heard of Tolkien, never read Lord of the Rings, and they're all going to go out and buy the book after the movie opens. I feel quite sure of it. Whether they actually read it or not is another matter entirely, but I think we will see a sort of Harry Potter effect here." Though there will be a handful of movie tie-ins--including a visual companion penned by Johnson under her nom de sci-fi, Jude Fisher--HarperCollins is quite content to work back catalog.

Not that Johnson's entirely happy about it. Though she's honored and thrilled to be working with Christopher Tolkien--"He's so close to the source," she says with proper reverence--she does admit there have been moments when the publisher and estate didn't agree. But the relationship between the two is an unusual one in publishing, a rare instance where respect for the work overrides the desire to exploit it. So David Salo will have to wait, whether he--or, for that matter, HarperCollins--wants to or not.

"The estate wants to keep the canon pure," Johnson says. "That is their raison d'être...But Christopher is a deeply erudite and deeply charming man who was an Oxford don, like his father, and brings that vessel of scholarship and meticulousness to every aspect of this business, which can be quite difficult sometimes." She laughs. "But it's out of a total respect for the words and his father's intent, and you have to respect that. We do."