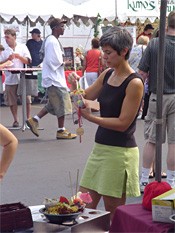 Everyone eats at this weekend’s Taste of Cleveland -- even Fluffy and Fido! The Purina Pro Plan Rally Across America Tour rolls into town as part of the annual food bash, and a cat named Max tries to claw his way over nine canine competitors for the top prize: $5,000 worth of pet chow. The nationwide contest focuses on rescue animals with remarkable comeback stories. Taste visitors vote for their favorite. “Max was treated so poorly in his early life, yet he now acts as a therapy animal,” says Theresa Clifford, who nominated the 15-month-old Pennsylvania kitty -- the only feline to make the finals.