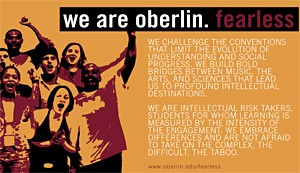 On a cold, drizzly Sunday before finals, Java Zone in downtown Oberlin is blanketed by a library's hush. Students sit engrossed in their laptops, steadfastly avoiding chatter as the cappuccino machine rumbles behind the counter.

In flounces a young blond couple — she in a grandmotherly knit shawl and plastic Paddington galoshes; he with a greasy, too-cool-to-wash-my-hair 'do. They order hummus and falafel salad, keeping their voices low.

They could be poster children for the Oberlin most of us know: the hippie, liberal, let's-eat-tempeh-and-have-safe-sex-parties college, a place where co-ops replace fraternities and green hair is more popular than lip gloss. The school was a pioneer in admitting blacks and women, and now aims to fight global warming by becoming carbon-neutral.

But the 2,800-student college is struggling with an identity crisis these days, created by the ultimate Oberlin enemy: a marketing consultant. Two years ago, the college hired this strange creature to update the school's long-standing motto — "Think one person can change the world? So do we." He came up with a single mantra straight from a Mountain Dew commercial: "We are Oberlin. Fearless."

The slogan set off a storm of protest and ridicule on the tiny campus. The fiercely intellectual natives not only consider it false advertising; they don't want to go to school with anyone who buys into it.

"Do we really want no fears? So we want to be not human," gripes Devin Myers, the unwashed 21-year-old senior from Arizona. "It seems like something Schwarzenegger would come up with."

Alas, the slogan was prompted by a much more mundane evil: economics. This year, Oberlin was listed at 20th place in U.S. News & World Report's liberal-arts college rankings, well behind bigger names like Williams, Swarthmore, and Amherst. To survive, it believes it must compete for the more monied, cable-knit-sweater set that's long buoyed those schools' lavish endowments.

In 2005, after years of budget deficits, Oberlin administrators declared that the school was no longer in "a sustainable financial position," according to Inside Higher Ed. Their plan was to reduce the number of students and faculty while catering more to those who could pay full tuition and board, which runs $45,500 a year.

But while other small liberal colleges have already faced this dark reality — Antioch College almost closed this year — a focus on cold, hard numbers was blasphemy in Oberlin. Some took the strategy to mean fewer slots for poor or black students, who would be replaced by a conservative Palm Pilot and Kate Spade set.

Marketing consultant Mark Edwards was hired to revamp Oberlin's image. But his "fearless" campaign — the kind of generic phrasing that evokes soft-drink and SUV commercials — delivered more oxygen to the fire. President Nancy Dye had already been criticized for budget cuts and not listening to faculty. As the uproar reached its peak in the fall of 2006, she resigned.

Edwards insists he was simply trying to broaden the school's image "beyond the social-justice message." The slogan is about "academic fearlessness," taking risks and breaking taboos, he asserts.

But students just saw it as a punch line. "I didn't hear anyone ever say anything good about it at all," says sophomore Sam Lewis.

In response, a comparative American studies class staged a protest last year, urging people to describe what they feared. Students Chip Williams and Ma'ayan Plaut created a video parody called Fearless: The Story Behind the Motto. The opening scene shows a room full of suits, one of whom announces: "Changing the world is for faggots . . . Oberlin needs a new motto, because that world-changing shit is totally gay."

Some Obies say the unabashedly cheesy "change the world" line was what attracted them to the school and worry that "fearless" will appeal to a less socially conscious crowd. They already believe younger students are becoming too Banana Republic, too reluctant to ride a unicycle at the Friday drunkfests on the green.

"I feel like the circus people are gone," says Fiona Ritter, a 21-year-old senior from New York.

Of course, it's hard to find evidence of these changes. Steven Roth, an alum and marketing consultant hired to evaluate the effectiveness of the "fearless" campaign, says it will take another year to measure its full impact. But the latest freshman class hasn't changed much. He measured their personality types by looking at the schools they were admitted to along with Oberlin. Seven out of 10 were the same schools that have been cropping up for Oberlin kids for the past five years. And more than half of this year's freshman class was offered financial aid. "It's the same type of student," Roth says.

Moreover, not everyone can muster outrage over a mere marketing slogan. As alum association president Bill Hilton points out, it's simply a word that's supposed to appeal to 17-year-olds as they sift through pounds of college brochures. Besides, he likes it.

"It kind of captures or emphasizes a spirit that pervades the place," he says. "It takes courage to combat injustice."

Julius Hill, a 2004 alum who lives in the Cleveland area, adds that "fearless" at least differentiates Oberlin from your average artsy-liberal institution. "Even if it is cheesy . . . at least it will be known for something."

And as 2003 grad Cara Bucciarelli observes, Oberlin has feared an invasion of jock/conservative/rich kids for years. Every generation thinks the freshmen are less hippie or activist than they were, but an institution is not easily changed, says math professor Michael Henle, who has taught here for 37 years. "I doubt something as ephemeral as an ad campaign's gonna have much effect."

Yet protests — be they great or small — are what makes this Oberlin. "I don't see how the slogan matters," says sophomore Alex Casanave. "But it is a silly thing to say."