Tears of a Clown

The Eyes of Tammy Faye teaches us that garish televangelists have feelings, too. 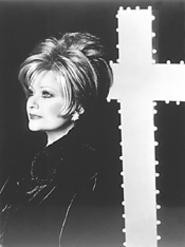 In a perfect world, any documentary about televangelists narrated by RuPaul and a couple of sock puppets would be hailed as the unquestionable conceptual masterpiece of the year. Alas, those stodgy Academy voters just don't understand cross-dressers, religious broadcasting, or foot-warmers made to look like dogs. And so the best that The Eyes of Tammy Faye can hope for is that it'll sell a bunch of tickets, both to those who once took the eyelash queen seriously and those who never did. The film should play well to both sides, as it emphasizes both the camp elements and the poignant. Regardless of whether it changes anyone's mind, there is nary a dull moment.

Don King, whose hair is even more disturbing than Tammy Faye's, is fond of using the phrase "only in America," but it seems especially apt here. Where else would a woman who got married on April Fool's Day to a man who looked like a cross between Wally George and The Joker -- a woman who obsesses over dead people's glasses and rode to fame on the strength of a Christian puppet show -- seem like anything other than a figment of some screenwriter's drug-addled imagination? TV's King of the Hill tried to parody this sort of thing, but no satire can top the clips we see here, especially when Jim Bakker tells us that he and Tammy would have real marital disputes on the air, using the puppets as surrogates.

What everyone really wanted to know back in the '80s was what Tammy Faye looked like without her makeup, and we do get to see some childhood and teenage photos that more or less show us. Nowadays, her lip liner and eyeliner are permanently tattooed, and her eyelashes glued on individually. "Without my eyelashes, I wouldn't be Tammy Faye," she informs us. "I don't know who I'd be, but I wouldn't be me." No argument here. From the early photos, we follow Tammy and Jim as they springboard off the puppet show's success to found The 700 Club, only to be ousted by network president Pat Robertson -- and then move on to Trinity Broadcast Network, only to be ousted again, this time by partners Jan and Paul Crouch. From there, the Praise the Lord (PTL) empire began, culminating in another TV network, this one with its own satellite, and the Heritage U.S.A. theme park, which the film somewhat dubiously claims was second only to Disneyland and Disney World as an amusement park in the U.S. Jim and Tammy, the film suggests, were more quintessentially American than most other televangelists: They were the first to incorporate humor on a wide scale into their preaching, and they were more inclusive than most, judging by some footage of Tammy comforting a gay man with AIDS and listening to a guest explain how a penile implant works. We even hear Jim saying, "Religion is boring and dull most of the time."

Of course, it didn't last. Jim's tryst with Jessica Hahn was used by Jerry Falwell first as leverage, then as moral high ground as he swooped in to take over PTL. Falwell is portrayed herein even less favorably than in The People vs. Larry Flynt, as an omnivore who'll eat his own kind to advance his profile. The religious right in general comes off badly: We see Tammy typing letters on her personal pink stationery to Falwell, Crouch, Robertson, and so on, asking them to be interviewed for the film, but all decline. The only prominent conservative Christian caught on camera is Pat Boone, who, surprisingly, compares Tammy to Hillary Clinton, citing both as women who tend to be blamed for their husbands' flaws.

Where the movie falters a little is in its attempt to reposition Tammy as a gay-friendly icon, as seen by its L.A. premiere at Outfest. Yes, narrator RuPaul seems sympathetic, and yes, Tammy briefly cohosted a talk show with her openly gay friend Jim J. Bullock. But even he admits that he thinks Tammy probably doesn't approve of homosexuality. Tammy simply says that she doesn't label or judge people (perhaps because she's so obviously been on the receiving end of judgment many times), but the film doesn't present much evidence that Tammy has thought about the issue of homosexuality much, or anything else: She simply doesn't seem that smart. On the other hand, she is a heavily made-up lady with a strong presence who can really belt out a tune (too bad she always relies on over-the-top sugary backing tracks), and that fact alone will endear her to drag queens.

On the whole, it's hard not to feel some sympathy for the woman: She was (and still is) naive, her husband cheated on her, and she got screwed over by her so-called friends. But Jim, in his brief interviews, doesn't seem like an easy dupe; it's hard to believe he was always on the level. And when the Reverend Mel White tries to defend Jim and Tammy's use of funds by saying they were living no more luxuriously than other televangelists, well, that's a bit like saying Ted Bundy murdered no more people than John Wayne Gacy, and therefore, Bundy has the moral high ground. And whatever happened to those moments during his trial when Jim claimed to be hallucinating giant animals attacking him? We're not shown those.

Ah, but regardless of whether you agree with directors Randy Barbato and Fenton Bailey on everything, you can't not love a documentary that traces a life so far beyond parody that it's almost impossible to believe. And while the sock puppets who introduce each segment get tiresome after a while, they're perfectly in keeping with the spirit of things. Tammy Faye's legacy is one of those uniquely American pop-cultural artifacts -- like Twinkies or Howdy Doody -- that will continue to irritate some, amuse others, and simply baffle foreigners who wonder what all the fuss is about. This film is as good a way as any to relive the phenomenon.