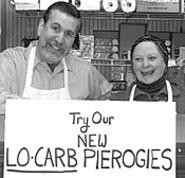 In Ten Minutes From Cleveland, 10 stories, each running 10 minutes, offer a look at the city through some of its historical landmarks. "The arc of the piece is that it occurs in one day in April," says director Eric Schmiedl. "We start on the Detroit-Superior Bridge at six in the morning and end up in the Flats beneath the bridge at midnight."

Playwright Eric Coble's valentine to Cleveland (which premieres Friday at Dobama) takes theatergoers on a daylong trip to the West Side Market, Legacy Village, the Cleveland Clinic, Tremont, and Jacobs Field. "Place becomes the springboard to explore things," explains Schmiedl. "The question is: Does place bring people together or tear them apart? In each play, place really affects the way people are acting and interacting with each other."

Ultimately, it's a hometown story most Clevelanders should be familiar with, adds Schmiedl. "It starts as the first beautiful day of the year," he says. "And when it ends, it's 20 degrees and snowing." Ten Minutes From Cleveland is at Dobama Theatre (1846 Coventry Road in Cleveland Heights) Friday through May 8. Show times are 8 p.m. Friday and Saturday and 7:30 p.m. Sunday and Thursday. Tickets are $15 to $20; call 216-932-3396. -- Michael Gallucci

The Cable Guys
Comedians hit the road for HBO special.

Dane Cook plays by his own rules, especially if his Tourgasm is going to be seen on HBO. After he turned down the cable giant a couple times because he wouldn't have a final say in the production, the network brass finally relented. By the end of the month, the Boston comedian will have hit 20 college campuses, producing and videotaping every minute of the tour. "When you hear the new material," says Cook, "you'll see why I wanted to wait." Patience has paid off. At a recent gig in Aspen, HBO asked Cook if he could tape a second special to air later this year. He said he would, but only if it could be shot in his hometown. "Of course, I was flattered to fucking death," says Cook. "Being on HBO is something I have dreamed about for many years." Tourgasm is at 8 p.m. Saturday, April 16, at Kent State University's Memorial Athletic & Convocation Center, 191 MAC Center in Kent. Tickets are $26; call 216-241-5555. -- Cris Glaser

Charlotte Blake Alston doesn't forget the time when a "white cowboy" was so moved by her African American storytelling that he wrapped her in a bear hug as she walked offstage. Nearly a decade ago, the Philadelphia-born ex-teacher thought that if she could touch longhaired rednecks with her tales from Senegal, Mali, and Guinea, she could dump her classroom gig. These days, Alston regularly holds court at Carnegie Hall in its concert series for preschoolers. "I tell stories because the stories demand to be told," says Alston. "If the story doesn't do anything for me, it stays where I find it." Alston shares stories at 2 p.m. Saturday at Cuyahoga Community College's Eastern Campus, 4250 Richmond Road in Highland Hills. Tickets are $10, $5 for kids; call 216-987-2587. -- Cris Glaser

Space Is the Place

At Saturday's Astronomy Day, solar scopes, microscopes, and Eva the inflatable astronaut gather to teach folks all about outer space. Promises Jay Reynolds, who'll discuss Mars exploration probes: "Players who wouldn't ordinarily come together will be here." Among them, a team from the Deep Impact project, which involves ramming probes into comets. "It's just totally out of control," says Reynolds. It happens from 10 a.m. to 11 p.m. at NASA Glenn Visitors Center, 21000 Brookpark Road. Admission is free; call 440-871-2900. -- Lucy McKernan