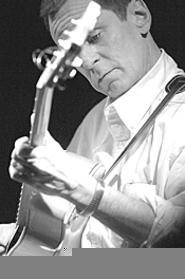 "When I design bars, I think of a song," says Terry Barbu, the founder of Liquid Living, the management group that owns Tramp/Funky Buddha and 10 other clubs from the Warehouse District to Atlanta. "For Tramp, I was thinking of Kid Rock's 'Cowboy.' For this, I was thinking of 'Rawhide.'"

Set to open Friday, March 11, Liquid Living's newest addition to the Warehouse District is Tequila Ranch/Killer Burrito (1229 W. 6th St.), a rock club with an adjacent California-style Mexican restaurant -- because before or after a gutful of brew, nothing's better than a burrito the size of your head. The restaurant will be open all week, and the bar will be open Thursday through Sunday.

The name makes it sound like a country bar, and the decor -- dark-stained pine and a mechanical bull -- completes the saloon theme, but Tequila Ranch is really a rock hang. Fridays and Saturdays, local and national bands will play on an elevated, eye-level stage behind the bar, where an all-female bar staff will give and get body shots of over 30 varieties of tequila. Dressed in cowgirl boots and cutoff jean shorts, they're encouraged to create the maximum possible production as they scale a 14-foot ladder to get top-shelf brands.

"This is not a country bar," says Derrick Downie, one of Liquid Living's three owners. "The whole idea is down-and-dirty rock and roll. No wine, no martinis. Any surface here that's solid enough to climb and stomp on, we want to see someone stomping on it."

Liquid Living launched across the street 10 years ago with Liquid, when the Flats were still a hopping tourist destination and the West Sixth Street scene was just an idea.

"I think the Warehouse District is absolutely here to stay," says Barbu, who sparked the area when he founded the neighboring Spy dance club. "This is where people are coming. If you provide good entertainment and keep it fresh, people will keep coming back."

· Integrity ringleader Dwid has announced a lineup for the Integrity relapse Thursday, March 24, at Peabody's (2083 E. 21st St.). From the To Die For era, he'll be joined by bassist Steve Rockhorst and guitarist Mike Jochum. Ringworm/Dead Even guitarist Matt Brewer and American Werewolves/Final Plan drummer Nate Jochum will round out Integrity for the first time, edging the number of onetime members to nearly 70. Meanwhile, the debut EP from Dwid's Sledgehammer project is now available in the States through Martyr Records.

· Cleveland rhymer Romey Rome has posted a video for his "In the Club" single online at www.blastro.com.

· Cleveland blue-collar Oi! band the Brazen Rogues have landed a spot on the nationally distributed Backstreets of American Oi! 2 compilation, which is slated for late spring release on Philadelphia-based Street Anthem Records.

· The Rock and Roll Hall of Fame (1 Key Plaza) will host an exclusive, unedited broadcast of its induction ceremony Monday, March 14, beginning at 7 p.m. Tickets are $10.