"Lowest of the Low" (Bridge Nine) 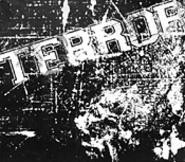 Scott Vogel has been showing up big-name hardcore bands for years. The enthusiasm and passion the Buffalo native brings to his bands (Slugfest, Despair, and more recently, Buried Alive) have caused supporting gigs to become de facto headlining showcases, embarrassing bands with bigger names and tour support along the way. Unfortunately, none of Vogel's bands has had the studio chemistry to lend albums an equivalent polish.

Thankfully, Vogel has turned the page with his latest outfit, Terror. The Los Angeles group's debut EP is one of the best hardcore releases of the last five years. The disc explodes with immeasurable antipathy and breakneck speed; each song seems faster than its predecessor (the longest tunes clock in at just over two minutes). Even the breakdowns reflect Terror's old-school standards, gaining menace and moshability from Vogel's guttural, vein-bursting screams, rather than from turgid riffs.

If Terror can be criticized for anything, it's the distance at which Vogel's scene politics hold both hardcore outsiders and newcomers. Yet it's difficult to fault him too much. As he screams in "Life and Death," "You know I'll fight to keep this alive/Because if this ever dies/I fucking die."