September 21, 2005
comment
Stand-Up Showcase The Goat, or Who Is Sylvia? Girth 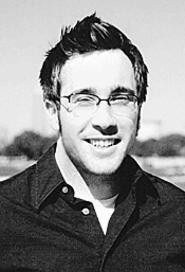 Jim Tews will skewer just about any person, place, or thing for a laugh at the 10-comedian Stand-Up Showcase this weekend. From the 1985 Plymouth Reliant he drives to the Army recruiters who constantly call, nothing is immune. Except politics. "I have my opinions, but I think there's so much other stuff people relate to," says the 24-year-old comic. "Basically, I don't have the intelligence to analyze politics." But he does have the smarts to nail a good joke. Like the one he wrote after his gay buddy took him to a homo bar. The tale -- which he's dubbed "Propositioned" -- recounts an old guy making a pass at the super-straight Tews. "The way he looked at me made me feel uncomfortable," says Tews. "Even if a woman looked at me that way, I would have felt uncomfortable." Laughs start at 8 p.m. Friday and Saturday at Kennedy's Cabaret, 1511 Euclid Avenue. Tickets are $5; call 216-771-8403. -- Cris Glaser

Edward Albee's latest prize-winning play is a touching story of love between a successful, middle-aged architect and . . . a goat? "This is one hot goat," laughs Joel Hammer, who directs Dobama Theatre's production of The Goat, or Who Is Sylvia?, which makes its area premiere on Friday. "Actually, as it unfolds, it doesn't seem very bizarre. It seems totally plausible." Remarkably, it isn't a comedy. "It plays as a tragedy," says Hammer. "Just supplant the goat with a woman." Ultimately, the romance serves as a metaphor for the playwright's own homosexuality. "It has some pretty powerful messages about choices of love," says Hammer. "Albee had these same issues when he came out of the closet." The Goat is at the Cleveland Play House Studio One Theatre (8500 Euclid Avenue) through October 16. Show times are 7:30 p.m. Thursday and Sunday, and 8 p.m. Friday and Saturday. Tickets are $17 and $20; call 216-932-3396. -- Michael Gallucci

Pat Mahnke has heard it a lot: Girth, his hard-rockin' band, sounds like Sevendust. Just don't ask him to play any Sevendust tunes. "I like the compliment," says the guitarist. "But I couldn't play a single song by them to save my life." But the Euclid quartet can juggle Pantera, Anthrax, and Iron Maiden covers with originals from its CD, The Sweetness of Rejection. Says Mahnke, "We definitely like it heavy." Girth plays at 10 p.m. Friday at the Backstreet Café, 7865 Plains Avenue in Mentor-on-the-Lake. Admission is free; call 440-257-5100. -- Cris Glaser