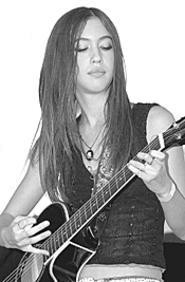 Austin, Texas, is not a town for 17-year-olds. The city's annual South by Southwest Music Conference is pretty much one prolonged beer belch, the Alcohol Olympics. For four nights each spring, downtown streets are blocked off, so that thousands of revelers can stumble about as if the town were poised on a fault line. Tipsy Japanese cowgirls teeter next to shaggy guys in cheetah-print G-strings, while rabid street preachers come at you like Dennis Leary with mange. The air reeks of booze and ambition; everyone is sticky with sweat and barbecue sauce. Of the 50-plus clubs where close to 1,500 bands perform, only about a dozen are all-ages. In short, it's no place for a dad to bring his teen daughter.

Will Voegele has learned this firsthand. "Oh, geez," the father of Cleveland singer-songwriter Kate Voegele groans when the subject turns to the piss-drunk pandemonium of Austin after dark. His daughter, still a junior at Bay High School, is in town for a gig at the Women in Rock Showcase, where she's getting her first glimpse of gold-medal binge-drinking and large men exposing themselves in public.

"I don't worry, because I know Kate is so well-grounded," Will says from Austin's Ironworks rib joint, a rustic, open-air haunt, where autographed pictures of Dennis Quaid and Henry Winkler adorn the walls and the staff chases pigeons out of the dining area with brooms. "I also think there's a danger in trying to keep kids from seeing what's out there in the world. You can shield them from stuff and then they end up having to face it and not be prepared, or you can prepare them for it and they can deal with it when they see it. So that hasn't bothered me."

Nor does it seem to bother Kate, an impressively nonplussed young woman who's been writing songs and playing guitar for less than two years, but who's already being courted by major record labels, thanks to the affecting acoustic pop found on her debut EP, The Other Side. She's opened for John Mayer and the Bangles. She's been flown to L.A. to showcase for Maverick Records. While in Austin, she's taping segments for the local Fox affiliate as well as the Nashville Music Network.

All this from a deceptively fragile-looking girl, so thin and delicate that she seems to be made of porcelain. With long brown hair and a fresh-scrubbed beauty, Voegele looks as if she stepped from a Noxzema commercial. She has an air of ease about her, probably because her developing success is as much a surprise to her as it is to her beaming dad, who had to sneak into her bedroom to hear the home recordings Kate began to make after a freshman fling gone sour inspired her to begin penning songs.

"That was kind of a catalyst for the songwriting," Kate says of the boy trouble that launched her music career. Having sung in church and in children's choirs and played flute since the fifth grade, Voegele was no stranger to music, but she had never attempted to write songs before. "I just looked at this new singer-songwriter vibe that was going on in the music industry, and I was like, 'You know, maybe I could do that. That looks like it would be cool, that looks like it would be fun. Why not give it a shot? I've got something to write about.' I started playing and realized it was really therapeutic."

After hearing Kate's first songs, Will -- a real-estate broker for Forest City by day, a longtime musician and home-recording enthusiast by night -- convinced her to let him record a more professional-sounding demo. He then passed along a copy to a Warner Bros. rep backstage at a Michelle Branch concert. The disc began to circulate, and soon Clear Channel was booking Kate in Pittsburgh and Cleveland.

Less than a year later, Kate was invited to perform at the biggest music convention in the country. Her gig comes on Saturday night, at a place called the Lucky Lounge. With high-beamed ceilings, Day-Glo-orange light bulbs snaking up and down the venue, and a large, spherical plastic backdrop behind the stage that pulses with soft pink and yellow hues, the place looks less like a rock club than one big art installation with loudspeakers. When it's Kate's turn to perform, she's faced with less than enviable conditions.

The band that precedes her is the loud, militantly feminist Butchies, a girl-punk combo with a national record deal and a small but vocal following that's shown up in force tonight. The band's allotted time runs out quicker than the members anticipated, and they exit with an unhidden agitation that their audience clearly shares. The stage isn't exactly set for pretty acoustic pop.

But Voegele shows enviable poise, as if she's too young even to realize that she should be nervous. Wearing flip-flops, cargo pants, and a white half-shirt, she wields a guitar half her size. She's flanked by her father, also on guitar, and stocky bassist Phil Ajjarapu, who performs barefoot, donning a shirt that boasts "Your Girlfriend Wants Me."

Voegele stomps her foot and juts out her lip as she plucks out heart-on-the-sleeve pop, her voice a soulful purr with a fluttering upper register. Her songs are predictably relationship-obsessed; she sings of boys and walking barefoot in the grass. But her words manage to resonate with the crowd before her, most of whom are at least a decade her senior, but who sway and smile nonetheless. When Voegele sings, "I'm so wrapped around your finger" at set's end, much of the audience is thinking the same thing.

"She's very dynamic, she's very radio-friendly, she fits the pop format extremely well for her age, and she's able to write original songs that are very accessible," says Jeff Harlan, head of Women in Rock, a nonprofit organization that promotes women in the arts and which most recently broke Sony artist Cheyenne. "Those are many of the traits that one would be looking for in finding mainstream success. With the proper producer-nurturing, she could become whoever she wants to be. I really believe that, and I just don't go on about artists like this."

To call Voegele Austin's Next Big Thing is a cliché unworthy of her, but there's little doubt that she'll soon be signed. In the meantime, she's contemplating college -- whether to hit the campus or follow in Jewel's footsteps.

"I honestly don't know," she says of life after 12th grade. "It's not like I'm particularly set on one thing. I think that might limit my opportunities. Right now, I'm trying to do as much as I can in school. I want to be in high school. I enjoy it. I'm one of those weird kids. I'm a dork. What can I say? I don't know where it's going right now, but I'm doing my best to keep up with everything."