That Club Is a Tramp 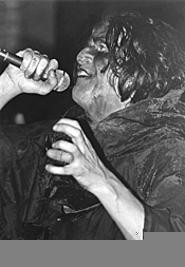 "It's primarily a dance club," says general manager Nicole Giglio. "It's a different atmosphere than you'll find anywhere else in Cleveland."

Tramp, located at 1360 West 9th Street, is the latest venture from Liquid Living, a design and management company that owns downtown danceateria Liquid, martini bar Fusion, and both brew-oriented Boneyards, in addition to Atlanta clubs Eden, Eleven50, and the Gallery. The club opened October 17. A strict dress code and cover charge haven't helped thin the crowds yet. Until the opening weeks' traffic dies down, local DJs will spin varieties of techno and club music. Later in the month, the club will begin hosting intimate sets by nationally known DJs.

· Hometown rockers Dirt have joined forces with the Cleveland Browns. When the team scores at home games, Dirt's unofficial anthem, "Brown and Orange," has been playing over the stadium PA. Dirt recorded the song this summer, laying down rallying lines like "Put cha' hands up/Wave your arms/It's the brown and orange/Bring it on." Cleveland International Records presented the track to Browns President/CEO Carmen Policy, who gave it the thumbs-up. Dirt singer Dave Burzanko penned the song. He also wrote "Swing Batter Swing" about the Indians in the mid-'90s.

· Industrial rock supergroup Pigface will make an in-store appearance at the Modern World boutique Saturday, November 8, from 2 p.m. to 3:30 p.m. Pigface mastermind Martin Atkins will bring his crew to the Ohio City fashion store to sign their latest offering, Headf . . . , a remix companion to this year's Easy Listening, which featured contributions from members of Kittie, the Clash, and Ministry. Pigface headlines the Odeon that night.

"We've got some special shit planned," says Minadeo. "We're going to be playing songs dating back from the earliest days of Poets, all the way up until the last days. In fact, we even have a couple new ones. And we're going to be giving away tons and tons of free stuff."

· Prog-rock act Prism Theory is among the finalists in the Independent Music Awards' hard-rock category, thanks to the song "Something to Believe." The Cleveland band will appear at FYE in the Mentor Great Lakes Mall to promote its new CD, In the Wake of a Dream, which features the cut, from 2-4 p.m. Saturday, November 8.