De Niro delights, even in this slight sequel. 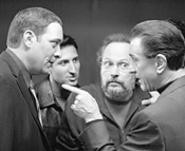 Robert De Niro always did love an acting challenge, but lately those challenges have been less along the lines of "Can I convincingly play a boxer?" and more like "Can I alone be good enough to make this formulaic mess worth watching?" Yes, it was impressive that he played a half-paralyzed stroke victim in Flawless, but it might have been more impressive if he'd chosen a better script. Analyze This, which preceded his most successful comedic turn in Meet the Parents, was barely even a script; it was a one-joke premise from which the entire movie could be extrapolated. Spoiler-filled previews weren't even an issue -- one look at the movie's poster (a mafia guy in therapy, yuk yuk -- remember, The Sopranos started around the same time, so the concept was vaguely novel) revealed everything one needed to know. The movie plays slightly better on TV, where it belonged in the first place -- you can make your dinner or do the ironing while watching and not miss a thing.

Rare is the good sequel; rarer yet is the good comedy sequel (the first person to say "Austin Powers" gets slapped). But Analyze That -- will the inevitable part 3 be called Analyze the Other? -- easily tops its predecessor. It's still formulaic, which is no surprise. But no longer is the film forced to spend endless minutes spelling out a character relationship that we already know simply by looking at the poster -- or even by coming into a theater with any previous knowledge of the sorts of characters De Niro and Billy Crystal usually play. Comedy may be hard, and certain individual gags were clearly difficult to film, but it's made a little easier when the characters the stars have to play might as well be named "Robert De Niro" and "Billy Crystal."

If there are any fans of the first film who are as rabidly obsessed with continuity as the average Star Wars geek, be advised that much of it is ignored. If we are to assume that real time has elapsed between the films (and the aging of teenager Kyle Sabihy, as Crystal's son, would indicate that it has), then De Niro's Paul Vitti has been in jail for three years instead of the 18 months to which he was sentenced. Crystal's Ben Sobel, meanwhile, inhabits a completely different house, minus the elaborate fountain given to him by Vitti. Fortunately, the filmmakers realized that the supporting cast played a large part in the first film's appeal, so Lisa Kudrow's back with a few more good lines, as is Joe Viterelli as the hilariously deadpan henchman Jelly.

Following an apparent psychotic breakdown, which induces the singing of many West Side Story tunes, Vitti is released into Dr. Sobel's custody in the hope of bringing him back to relative sanity in time for a parole hearing. Needless to say -- since every TV and theatrical trailer already has -- Vitti's faking; he simply wants out of jail to find out who's trying to kill him. While doing so, however, he has to live at Sobel's house and get a legitimate job, all the while trying not to freak out the good doctor's more uptight family (those viewers anxiously awaiting Jay Roach's Meet the Fockers get a bit of a preview here).

In a jab at that other "mobster-in-therapy" cult favorite, Vitti ends up getting a job as a consultant on a hard-edged mafia TV show titled Little Caesar (the logo is unmistakably familiar, with a gun for an "L," similar to The Sopranos' "r"). Though it seems a little funky to implicitly criticize the HBO show for being inauthentic, as this movie and its predecessor were hardly cinema verité, there are some good laughs to be had from an uncredited Anthony LaPaglia, more or less playing himself as an Italian-Australian cast as a New Jersey mobster.

In an apparent attempt to create yet another catch phrase beginning with "You," De Niro endlessly milks his trademark line from the first film, "You! You're good, you." Expect it on T-shirts any day now. But -- as if it needed to be said -- he's no Mike Myers and doesn't simply coast on repetition. In the film's standout scene, De Niro as Vitti pretends to be catatonic while Crystal, normally restrained in these films, unleashes his full barrage of comic improvisation to try and expose the fraudulence of Vitti's emotional paralysis. Bravely stone-faced throughout, De Niro emerges with comedic credentials fully intact -- outtakes over the end credits demonstrate just how hard it was for him to stay somber.

Everyone seems more relaxed this time around, including director Harold Ramis, who was presumably less intimidated once he knew that De Niro could be really funny and could draw a large audience to a comedy. That this sequel has less of a story than the first is actually a good thing -- the forced structure, which was almost groan-inducing the first time around, gives way to a more playful, anything-can-happen vibe. Sure, it'd still be fun if De Niro would do a good serious flick every once in a while. But in the meantime, this -- or rather, That -- isn't bad.