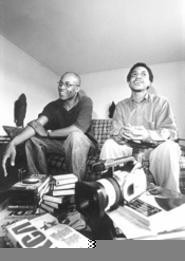 David Velo Stewart's modest Shaker Heights apartment is the quintessential bachelor pad. A few African masks hang on the walls in no particular order, and the only furniture consists of a sofa and a dining room table. On top of the table -- which is so cluttered, there's no space for placemats or candles -- there's a computer with a video camera plugged into it. Stewart's got everything rigged so that he can watch TV, edit whatever movie or video he's working on, and eat, all at the same time. The setup might be useful for filmmaking, but it's not exactly conducive to entertaining the opposite sex, and Stewart knows it. He's fed some of his relationship frustrations into the script he wrote for Hip Hop for Life, a movie about the difficulties faced by an aspiring rapper named Devon (played by local rapper Q-Nice). Despite being a low-budget production filmed entirely at small clubs in Cleveland, Hip Hop for Life recently screened at the prestigious Acapulco Film Festival and will have its official Cleveland debut on May 25, with a showing at Tower City (it screened privately last month at the Rock Hall).

"A lot of it is based in terms of me and my experiences as a filmmaker and disc jockey," Stewart explains over pizza and soft drinks. "As an artist, a lot of my friends told me to stick to teaching, or that I should have gone into corporate America, and that filmmaking wasn't going to work out. Some of the film is based on my experiences working as a disc jockey at different parties and how you're treated -- especially with relationships. On Friday night, I would be going to disc jockey, and my girlfriend would ask, 'Why can't you stay here?' or 'Can we go to the movies?' A lot of scenes I've lived."

When Stewart, a Cleveland native who graduated from the University of Virginia with a degree in African American studies and a concentration on film, finished undergraduate schooling, he had two choices: He could go to grad school or try to make it in Hollywood. He says he chose to get his master's degree in education and worry about pursuing a career in filmmaking later.

"I tell the students that it's so important they go to college first," he says. "Then they go on tour or whatever. And then, when it's all over and the mic is turned off, they can always get a decent job and support their family."

For Stewart, who teaches at University School, an all-boys private school in Hunting Valley, working with students has actually helped his filmmaking career. He says he often asks his students for advice when he's stuck with a scene, and he recruited 17-year-old Clarence Gaines IV (a.k.a. NRG) to assist him with the music and sound effects for Hip Hop for Life. Gaines and Stewart have worked together in the past on other movies that Stewart has made, but this is the first to result in an actual soundtrack.

"It's easy for me to imagine what he's talking about," says Gaines. "When we first met, he showed me a Freddy Krueger clip [that he wanted to imitate for its sound effects], and I automatically knew what he was talking about. I just went to the keyboard and started playing what I wanted."

Gaines, who started playing saxophone when he was in fifth grade and currently produces and manages two high school rap acts (Mach 3 and the Desert Crew), wrote and played all the music for Hip Hop for Life. He recruited local rappers to make cameos and handle vocals. The one stipulation was that there would be no swearing, but Gaines says that wasn't a problem for any of the contributors, which include Q-Nice, Paulie Rhyme, and Kem Machete, among others.

"On the issue of keepin' it real and everything, hip-hop was originally designed to provide a strategy against the streets," he explains. "The origins of hip-hop were about not indulging in drugs and street violence. They started breakdancing and beatboxing to get away from that. That's really what keepin' it real is about."

When Stewart started working on the film a year and a half ago, rappers such as KRS-One and Grand Puba showed interest in it, but Stewart opted to keep the production local, using only Northeast Ohio actors and actresses. While he admits that he thinks of Hip Hop for Life as a "demo" that would enable him to film a sequel with a bigger budget, he's content with the final product and proud of the local talent (both the rappers and the actors) that it showcases.

"I'm so glad that we decided it wasn't worth the money to bring them in," he says of the national artists. "We just wanted to let the local actors do it, because if it got to Acapulco or screened at the Rock and Roll Hall of Fame, people would say that it was because it had KRS-One or Grand Puba in it. But we got to those two main goals that I set, and I love that it was nobody but Cleveland people that got that accomplished."