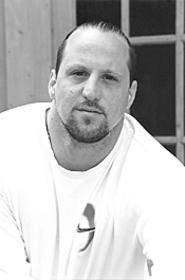 Sherry from Florida thinks that she and Fredo LaPonza are exactly the same person, and she simply does not understand how he doesn't see it. They are so perfect together that they should get married right now. Immediately.

But first, Jane from New York wants Fredo to fly out for a Sleepless in Seattle-style meet-up. She just knows that once the two are in the same place, sparks will immediately fly.

"My fucking cousin," says the star of Average Joe II . "He gives them all my phone number. He thinks it's funny or something. He'll be like, 'Well, she sounded really nice.' And I'll be like, 'Matt, she sounded like a prostitute.' And he'll just sit there smiling."

Fredo, clad in a silky black checkered shirt and dressy black creased pants, sits back in his seat and sighs. His signature brown ponytail is held back by a threadbare black rubber band.

"Fifteen minutes lasts a lot longer in Cleveland than it does anywhere else," he says.

He's not kidding. Three months after huffily walking out on bachelorette Larissa Meek, Fredo still can't go anywhere without being recognized. "I've started wearing a ball cap underneath a hooded sweatshirt," he says. "And they still recognize me."

At a wake, college students he's never seen forget their grief long enough for a "Hey, Fredo!" ("My presence takes a lot of tension off of what's going on," he later explains.)

At a restaurant in Little Italy, a blonde in a skirt and tube top interrupts his dinner to ask for an autograph. He smiles through gritted teeth and signs her napkin. (Fredo personalizes his autographs with phrases like "To Lisa, who is not your average teacher" and "Jimmy, you are definitely not an average plumber.")

At a club downtown, his buddies hang a red rope around their table. "No autographs tonight," one says, only half-joking.

The irony is that Fredo, a proud Clevelander -- "Seven Hills, baby!" -- was never really an average Joe. The show's website correctly called him a 31-year-old "concrete contractor" from Cleveland, but failed to mention that he was also a successful entrepreneur, part owner of the Flats club Kaos. (Another Fredo venture, an upscale bar-restaurant downtown, is slated to open soon.) He was driving a Jaguar and living in an expensive Warehouse District high-rise, and was already an elite member of Cleveland's downtown bar scene before Average Joe came calling.

Now he's making the scene all over the place. In the past few months, Fredo's hobnobbed with Britney Spears, slurped body shots off her best friend's bellybutton, and dated one of the contestants from Average Joe III. There was talk of a starring role on another Average Joe, and Queer Eye for the Straight Guy wanted to do a makeover on him. ("They wanted to cut off my ponytail," he says in disbelief. "You know why I have this ponytail? Because if they take it away, I have no hair.")

Fredo's also learned to name-drop like a Hollywood PR man. "I was at dinner with Trump and his fiancée the other month, and I asked him, you know, 'What's up with the hair?' And Trump said, when something works for you, you don't change it." Fredo pauses thoughtfully. "You know, I think that makes a lot of sense."

Directly after the show aired, Fredo tried to start up his own clothing line -- "Mostly T-shirts and dress-type stuff," he says. The plans were dropped last month, when the financiers concluded that Fredo's 15 minutes had passed.

Tell that to Massillon, where he's now headed to take part in a celebrity auction. Fredo makes a fidgety car companion, stretching and turning and twisting in the passenger seat of the Honda Civic that's transporting him. Though he buys and sells cars the way others buy and sell comic books, he hates to drive and hates even more to be unaccompanied. So he cajoles his friends into attending all his engagements: the L.A. premiere of his show, his Vegas rendezvous with Britney's friends, his newspaper photo shoot in Cleveland.

When he finally arrives in Massillon, he is quickly ushered inside the compact, gray-walled Knights of Columbus hall. For the next 35 minutes, he mingles with the crowd and apologizes to a crushed 33-year-old woman who was turned away at the door ("We've never had so big a turnout before," says the wide-eyed organizer). He tells half a dozen people that "my mother would slap me across the face if I ever brought home a girl like Larissa." He accepts the cell phone of a woman who says that her new boyfriend wants to talk to him ("Hey, man, how ya doing?" Fredo asks).

By 9, Fredo is called to the small wooden stage. He approaches with trepidation, looking back at the head table for support. He briefly tells the crowd of 100 how honored he is to be there, up for sale. The audience applauds, then the bidding begins.

"One hundred," someone calls.

He's sold to a Massillon prosecutor, a perky blonde with a cheerleader's demeanor, who says she'll use him for a political fund-raiser in June.

"It's going to be so much fun!" she says, pawing at Fredo's shirt.

At $250, Fredo's showing is respectable. It is, however, not the top bid of the night. Half an hour before he took the stage, a yellow lab puppy named "Buddy" went for an unprecedented $550.

Fredo looses himself from the prosecutor's viselike grip and returns to his table, where the organizer leans over and pats his hand.