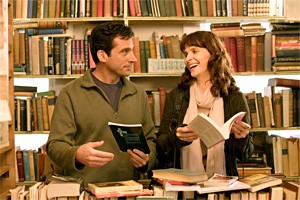 Dan in Real Life has this much going for it: It's not the worst Steve Carell movie of 2007. That honor goes to Evan Almighty, which, according to witnesses, had God himself bailing by Act 2. Then again, Dan in Real Life isn't really much of a movie at all. It's more like a montage of other movies, with Carell serving as the emcee.

You could fill this page with the titles of films that writer-director Peter Hedges ripped off in telling this story: Home for the Holidays, Sleepless in Seattle, What About Bob?, and Hedges' own Thanksgiving-dinner-flavored Pieces of April, to name a few. Assemble a cast — Carell, Dane Cook as the brother, Juliette Binoche as the brother's girlfriend, Dianne Wiest and John Mahoney as the parents, Emily Blunt as the blind date, and assorted other familiar faces posing as family members gathered in an idyllic oceanside spot — and the dots connect themselves.

Dan in Real Life isn't technically a "holiday film," as it doesn't appear to take place during a holiday, but there might as well be a Christmas tree perched in the corner. There's merriment, melancholy, recrimination, reconciliation, and, yes, touch football. And don't forget the pancakes, so fluffy and warm the theater will smell of Christmas morning, even in fall.

There are young children who say things like "You're a good father, but sometimes a bad dad" and "Love isn't an emotion — it's an ability." There's also a family talent show staged in the living room, during which one man sings to someone else's lover Pete Townshend's "Let My Love Open the Door."

But despite his alleged acumen in the field of parenting — he's an advice columnist for the local paper in an unspecified New England town — Dan's a fairly out-of-touch father, unwilling or merely unable to treat his girls with the guiding touch he demands of his readers. Thankfully, Dan doesn't have to spend much time alone with the kids: A few minutes in, he packs them up for a road trip to Rhode Island, where his parents live in a cabin on the shore. There, their estimable brood gathers for what appears to be a 12-day weekend. The girls occupy their time with doting relatives; Dad sleeps in the closet with the ever-thumping dryer. He also gets visited by a newspaper syndication company, which hopes to make Dan its family man just as his own kin are turning on him.

When Dan goes into town to retrieve the morning paper from the tackle shop/bookstore, he bumps into Marie (Binoche), who's looking for a book she can only describe as "human funny." The twosome retreat to a pier, where they bond over hot tea and giant muffins. He tells her his story ("Then she got sick, then she was gone"), and she comforts him with puppy-dog eyes and mile-wide grins. Love at first bite, you could call it.

But as it turns out, Marie is bound for Dan's family's house — to meet Dan's brother Mitch (Cook), who happens to be her new boyfriend. Dan is crushed. He spends the next several days goading Mitch, flirting with Marie, and avoiding his daughters, until he becomes perhaps the most unpleasant character in the movie.

Dan is the kind of role in which Carell excels — the broken everyman who's more comfortable lashing out than actually connecting. Dan in Real Life could be viewed as a sort of spiritual sequel to The 40-Year-Old Virgin: Dan's the little man Andy might have become, had his One True Love abandoned him with three children, who remind him of his former life at every glance.