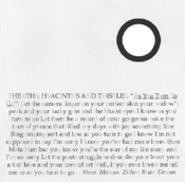 A sharp, witty, and prolific songwriter, Stephin Merritt is a rare modern tunesmith who isn't afraid to embrace nostalgia and flaunt his love for writers such as Cole Porter. And it isn't just a throwaway tribute with him; he really does flourish in the rays of old Hollywood musical themes. On 69 Love Songs, the 1999 magnum opus he recorded with the Magnetic Fields (just one of several aliases he uses on record), Merritt name-dropped Busby Berkeley incessantly and featured such rich lines as "I'm no Nino Rota/I don't know the score." This is a guy clearly in love with songwriting. Unfortunately, Merritt isn't equally blessed in the vocal department. His limited range consists mostly of shades of gray in the deep baritone section. It's not very effective, which is why he wisely enlists others to occasionally sing his songs.

The vocals on nearly half of 69 Love Songs were delivered by others, and on his latest project, Hyacinths and Thistles, released as the 6ths, Merritt leaves all the singing to others. Sally Timms, Bob Mould, Melanie (yes, old-school hippie Melanie), Sarah Cracknell, Odetta, Katherine Whalen, and new wavers Clare Grogan (Altered Images), Marc Almond (Soft Cell), and Gary Numan, among others, all pitch in. Yet Hyacinths and Thistles isn't nearly as dynamic as 69 Love Songs, nor is it quite as good as the first 6ths album, Wasps' Nests. It is, however, another achievement for Merritt. "As You Turn to Go," with Scottish eccentric Momus, is one of Merritt's most moving love songs: a tender, irony-free caress. And the atmospheric "Oahu" wraps its spare melody in a package of primitive synth beeps (which repeat the same tranquil loop for the album's concluding 25 minutes). Hyacinths and Thistles falls between Merritt's two musical passions: old-style songwriting and '80s new wave. But the abundant and diverse choice of vocalists puts the accent on the songs rather than the singer. Take this as Merritt the songwriter's demo tape -- an indication of what he is capable of. Which, it's obvious at this point, is almost anything.